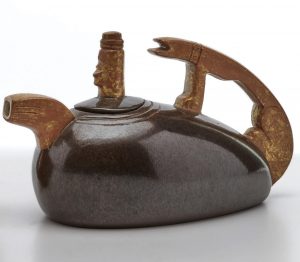 With a body like a polished stone and a handle reminiscent of indigenous Mexican animal figures, a recently acquired teapot seems to be of both nature and man, both ancient and modern. This elegant 1941 teapot by the prominent African American Modernist sculptor Sargent Claude Johnson is an extraordinary addition to NOMA’s decorative arts collection.

Sargent Johnson (American, 1888–1967) was best known as a sculptor that incorporated influence from the cultures of Mexico, Latin America, and West Africa into his own embrace of Modern abstraction. New Orleans’s Amistad Research Center collection includes a wood bust and two drawings by Johnson that were featured in Beyond the Blues, an exhibition at NOMA in 2010 that spotlighted the work of African American artists. 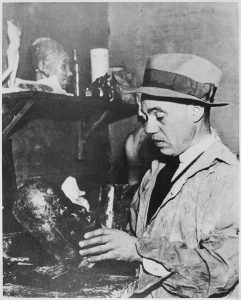 Sargent Johnson at his studio in Berkeley, California. Harmon Foundation Archives, courtesy of the National Archives and Records Administration

Born in Boston in 1888 to a father of Swedish ancestry and a mother with both part Cherokee and Black ancestors, Johnson chose to live his life as a Black man while his five siblings identified racially as Native American or Caucasian. The six Johnson children were orphaned as a young age, and when Sargent was only fifteen he went to live in Washington, DC, with an uncle who was married to the respected African American artist May Howard Jackson. Jackson directly addressed the Black American experience in her sculptural work, and was undoubtedly a formative influence for Johnson to consider nonwhite themes through his artistic practice.

Primarily working from San Francisco from 1915 on, Johnson supported himself as a picture framer while artistically experimenting in a wide range of media, including painting, printmaking, wood, copper, marble, and ceramics. Between 1926 and 1935, the artist was a regular exhibitor with New York’s Harmon Foundation, one of the first major supporters of African American artistic achievement and an important part of the Harlem Renaissance. In a 1931 article, The New York Times noted that Johnson was “quite as wild as ever, plunging furiously along in the wake of Soutine,” referring to Chaim Soutine (Russian/French, 1893–1943), the potent early Abstract Expressionist working in Paris. Johnson won Harmon’s prize for “most outstanding work” at at 1933 exhibition for Defiant, a drawing which The New York Times described as “simple in its planes as is so much of the modern Mexican work.”

During the Great Depression, Johnson was employed by the Federal Art Project of the New Deal (WPA) in California, where his work took on a monumental scale. He completed a carved redwood organ screen for the California School of the Blind, decorations for the San Francisco Maritime Museum, and sculptures for the 1939 Golden Gate International Exposition. In 1944 and 1949, Johnson traveled to Mexico, where he studied culture and art. While still incorporating the motifs of Indigenous peoples, his work became increasingly more abstract until his death in 1967.

This teapot is a rarity in Johnson’s artistic output. Though he maintained his own studio, Johnson did not have his own kiln. The artist rented an apartment behind the ceramic studio of his friend, John Magnani, an instructor at San Francisco State University who was in charge of the city’s WPA Crafts Project. Likely this teapot, an identical one in the collection of the Oakland Museum of California, and some known teacups were made in Magnani’s studio.