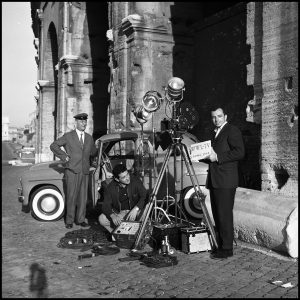 Del Hall’s career in photojournalism took him from his home in New Orleans around the world. As an Emmy Award-winning news cameraman and film editor, Hall pioneered the use of moving images on television news, and he applied the same perceptive and sensitive vision to take incredible still photographs of the people and events that shaped the second half of the twentieth century. During this tricentennial year of New Orleans’s founding, NOMA presents Best Seat in the House: Photographs by Del Hall examining the importance of Hall’s work to the history of the city. Photographs included in the exhibition, on view through January 6, 2019, showcase Hall’s ability to balance narrative and emotional symbolism in images that are as thoughtfully composed as they are “in-the-moment.”

Born in New Orleans in 1935, Hall grew up in the then-segregated Iberville housing project. As a youngster, Hall was enthralled by the movies, as well as the newsreel footage that preceded the features. Hall’s grandmother bought him his first camera, a Kodak Retina 35mm, while he was a student at Jesuit High School, and he bounced around the streets of the city learning to photograph his world. When he began working for WWL-TV, Hall found he had a knack for anticipating the way a situation might unfold and positioning himself in ways to get imagery that told a complete story in a unique way. Informed early in his career by a producer that a quality still photograph could earn him an extra five dollars, Hall made sure to take his camera on every assignment. Applying the skills he honed as a cameraman to still photography, Hall produced an impressive body of photographs that are at once packed with information and visually compelling.

His work for WWL in the early 1960s put Hall’s camera in front of many important New Orleans personalities, but also at regional events shaping the course of our national history. As activists worked throughout the Gulf South to advance the Civil Rights Movement, for instance, Hall’s footage made the struggle real for viewers across the country. So close was Hall to the action, that he was often swept up in events: he was arrested in 1961 while filming lunch-counter sit-ins on Canal Street. International assignments followed, including a documentary about the Second Vatican Council in Rome and then interviewing soldiers from Louisiana and Mississippi deployed to Vietnam. After moving to Chicago to work for CBS in 1966, Hall chose to work primarily as a freelance photojournalist, which allowed him to select assignments that he felt would be the most significant. When Del and his wife Ginger partnered up as a sound and image team in the 1980s, they followed stories around the world and, as often as they could, back to New Orleans. Wherever Hall took his camera, his photojournalism work put him in the best seat in the house to capture important events, which he visually captured with creativity and aplomb.