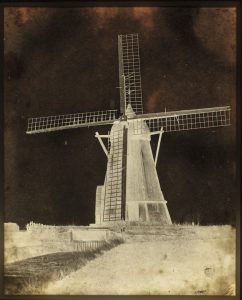 John Moyer Heathcote was an amateur painter and photographer in Norfolk, England, where he likely took this photograph of a windmill. Heathcote documented architecture and rural scenes, compiling photographs in albums including his 1853 Anglia Illustrata. This ghostly image is not a page from that book, but rather the paper negative used to produce a page in those albums or a model for watercolor painting. Heathcote used an early photographic process known as the calotype, in which photosensitive chemicals are applied to a piece of writing paper, that sheet is exposed to light in a camera, and then another series of chemical applications produce a translucent negative image on the sheet of paper. Heathcote coated his negatives in wax, which protected them. By exposing another piece of photographically treated paper to light shining through this negative, Heachcote – and us, today – could make a potentially infinite number of photographs of this windmill. However, there is only one example of this very negative obtained by NOMA in 2015.

The lineage between this windmill and today’s electrical wind turbines is fairly easy to see (and it is not the myth that either structure, then or today, causes any type of sickness). Before steam power, and in places that lacked moving water to provide power, mills like the one pictured here harnessed the wind to break down grains, make paper, squeeze oil from seeds, grind stone, and many other processes. While the negative imbues the structure with a haunting, otherworldly feel, Heathcote’s example of an English windmill is a fine reminder of humankind’s ongoing effort to use sustainable resources to make our everyday lives better.

Read about other photographs reflecting themes of sustainability, including images related to coal mining.