As NOMA considers the various aspects of sustainability this week, this three-picture story looks at an unsustainable resource and practice: coal and its extraction. As an unrenewable fossil fuel that remains the number one source of carbon emissions globally, the reliance on coal is unsustainable, but so is the human toll that its extraction exerts. These pictures highlight a history fraught with poverty, exclusion, and tragedy on the human side of the coal industry. 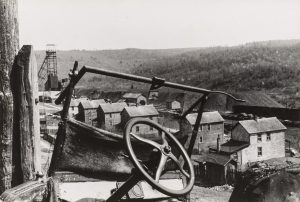 John Vachon arrived at the Farm Security Administration (FSA) as a twenty-one-year-old filing clerk, but after managing the rapidly expanding picture archive, photography became his vocation. In May of 1939, Vachon travelled to Kempton, West Virginia, to add pictures of the mining town there to the FSA collection. The mine (and the town) were owned by the Davis Coal and Coke Company, and had originally been established in neighboring Maryland, but by 1939, part of the mine had extended across the border and underneath West Virginia. In keeping with the FSA’s mission to document the poor living conditions of laborers across the country, Vachon’s pictures from his visit highlight hardship. In NOMA’s picture, Vachon photographs a row of company houses through the windowless windshield of a ramshackle vehicle (the glass has been replaced by a strip of burlap). The photograph also shows the proximity of the houses to the mining work. In other images from the trip preserved in the Library of Congress FSA archive, Vachon documented the open ditches that carried sewerage through the streets and the impoverished conditions of the interiors of the houses. He also photographed the miners, who faced danger every day as they worked to retrieve coal that would be transformed into energy for others. Vachon also photographed a sign at the entrance to the mine that read “NOTICE TO MEN SEEKING EMPLOYMENT: Unless you are willing to be careful to avoid injury to yourself and fellow workman, [sic] do not ask for employment. We do not want careless men in our employ.” Even with great care, however, mining was an accident-prone industry. In 1916, sixteen men ranging from 19 to 50 died in an explosion in the very same mine Vachon later photographed. 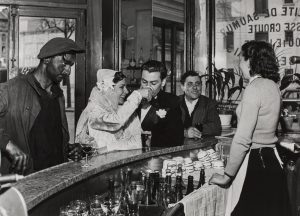 Although the mining of coal might be the most dangerous aspect of its path from ground to end use, every aspect of coal work provoked uncharitable assumptions about class, income, cleanliness, and intelligence. It is these associations that give Robert Doisneau’s Café Noir et Blanc it’s dramatic punch of class consciousness. The laborer’s rough clothing, soot-stained skin, and weary, but serious expression stand in stark contrast to the smiling bride and groom next to him, who seem ignorant of his presence. Indeed, of the five people in the picture, he is the only one not engaging with someone else. On NOMA’s print, the worker is referred to as a bougnat, a pejorative term used to describe someone who moved from the country to Paris. It also became associated with coal work since so many laborers found work in this or similar industries upon arrival. As this picture, made in a distant suburb of Paris suggests, their origins and occupation kept them apart from the rest of the community in which they lived and operated. This is, at least, the version of the story that Doisneau seems to tell. Doisneau was famous for arranging his photographs if the world didn’t cooperate with his vision of it. Although we don’t know if this was captured in the moment, or recreated with acquaintances as actors, his role as the author is clear, and limits the worker’s agency. This one moment, excised from the rest of his life ignores the rest of his community, which workers often discovered and established amongst themselves. 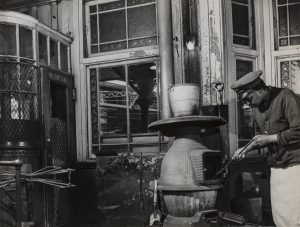 If Doisneau’s coal hauler had lived in New York, he might have delivered coal to a place like Franklin Square in Arnold Eagle’s photograph. In it, we see a transit worker stoking a coal stove for heat, while the structure of the Third Avenue Elevated train is visible through the window. Eagle was hired to photograph impoverished conditions and tough labor in New York City by the Works Progress Administration. The WPA, like John Vachon’s FSA, was a New Deal agency designed to employ artists in the Great Depression. The works that both agencies produced covered similar conditions in urban and rural areas across the country.

Together, these three pictures from NOMA’s collection trace the path of coal from its extraction, through delivery, and on to end use. This process has long taken a toll on the lives of those who work to provide it for the benefit of others. We now know that coal is detrimental to the earth as a whole, and yet it remains the number one source of carbon emissions, globally. As we consider the unsustainability of coal itself, as a non-renewable fossil fuel, we should not forget that the practice of extracting and consuming it has also been unsustainably inhumane in many ways.