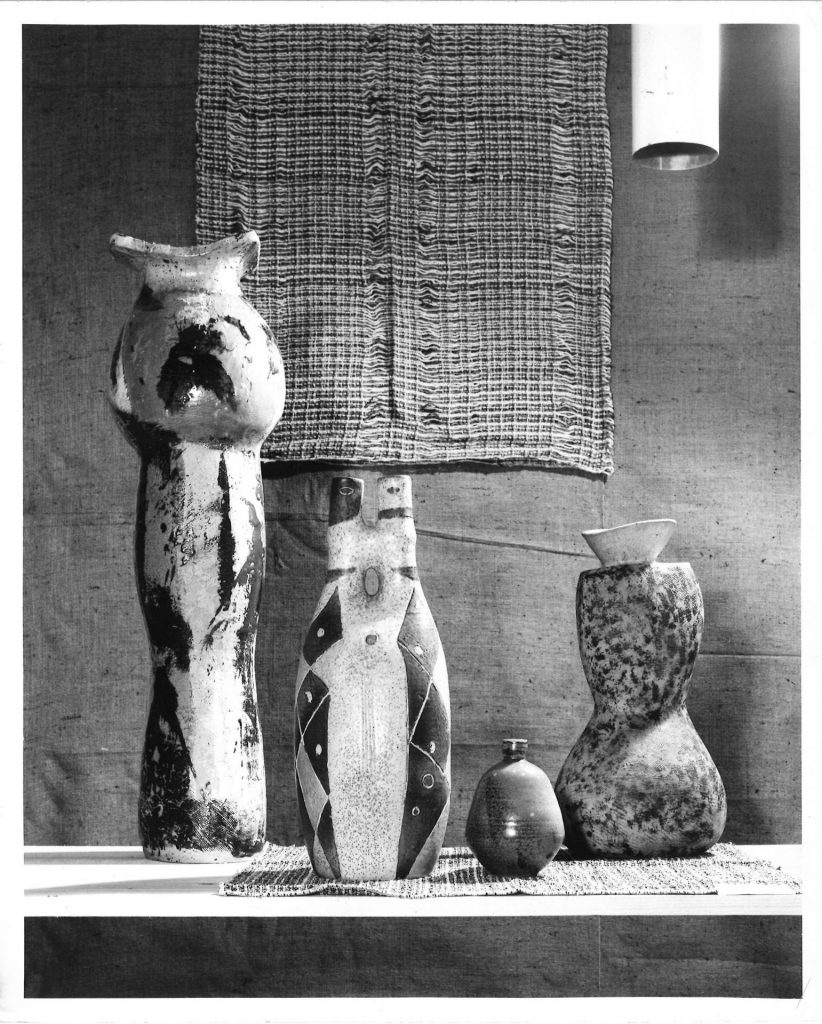 NOMA’s exhibition Katherine Choy: Radical Potter in 1950s New Orleans primarily examines distinctive pots made by Katherine Choy, a national leader in evolving ceramics from utilitarian objects into the purview of expressive fine art. While Choy’s radical work in pottery and her founding of the Clay Art Center in New York will be the lasting legacy of her short career, the artist also made award-winning enamels and had an active career in textile design.

On view in NOMA’s exhibition of twenty-five clay pots that show her innovation by being expressive, aggressively large, or asymmetrical and with glazes that intentionally leave parts of the raw clay exposed for all to see, there is one hanging textile that hints at another complementary side of her art-making.

Katherine Po-yu Choy (American, b. China, 1927–58) was trained as a painter and multidisciplinary artist at Mills College in California and the Cranbrook Academy of Art in Michigan. While at Cranbrook studying on the prestigious Ellen S. Booth Scholarship for one year, Choy worked primarily with two Finnish émigré artists: ceramicist Maija Grotell and textile artist Marianne Strengell.

Strengell (Finnish-American, 1909–98) a designer celebrated for merging Modern industrial looms with traditional Scandinavian textiles, worked as a freelance fabric designer across Sweden and Finland before accepting the invitation of her friend Eliel Saarinen to come teach at his Cranbrook school. In 1942, Strengell assumed leadership of the Department of Weaving, and soon after, a power-loom was installed in the studios. Strengell paired her technical and historical instruction with thoughtful attention to professional issues like merchandising and client relations. Exposure to that variety of skills would serve Choy well as she navigated her professional career. 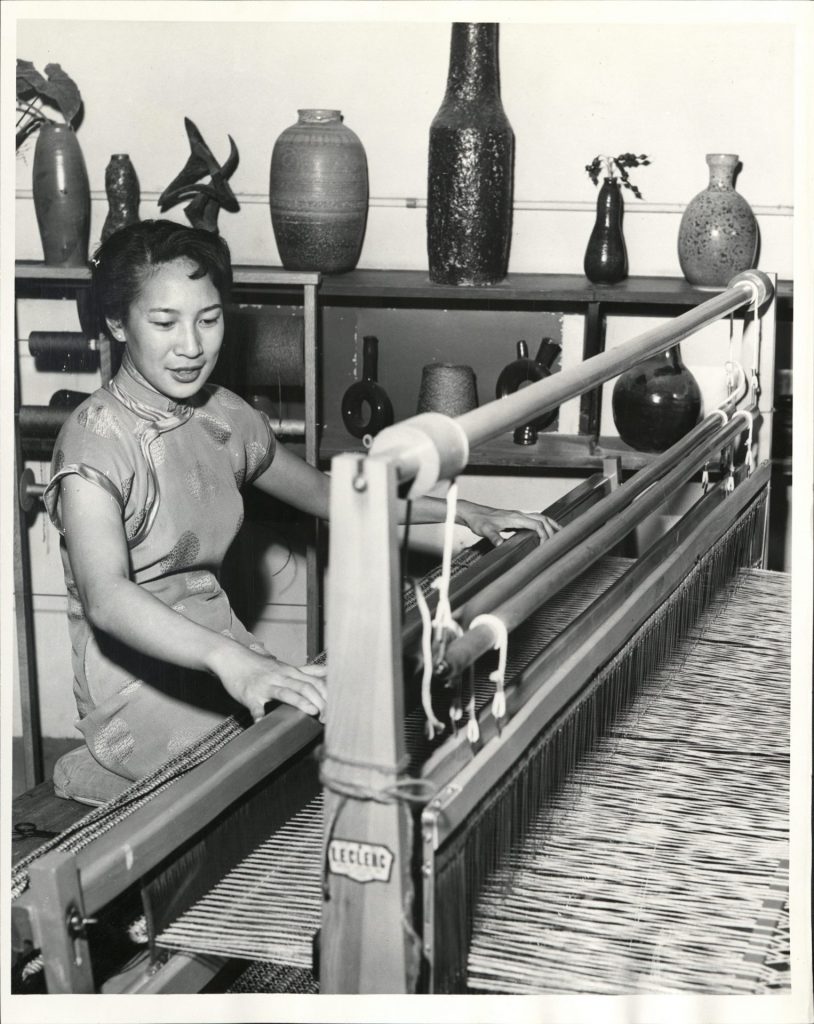 Katherine Choy left Cranbrook to come to New Orleans, where she was hired by Newcomb College to lead the ceramics department in 1952 at the age of twenty-four. Choy continued weaving while teaching at Newcomb, displaying her textile designs at exhibitions and working as a designer at Isabel Scott Fabrics in New York.

An April 1954 New Orleans Times-Picayune article noted an exhibition of “exciting and practical” Modern textiles on view at the Newcomb art school galleries. This show, featuring textiles by Choy along with fellow faculty members Howard Jones and Helen Frick Jones, displayed the fabrics in domestic settings with furniture borrowed from local retailers, and included sculpture by Lin Emery and ceramics by Choy. The article notes that Choy’s weavings “let the pattern govern the whole,” and that her rug was “modern in conception and very rich in color.”

In 1956, Katherine Choy took a one-year leave from Newcomb, during which she became employed with Isabel Scott Fabrics to develop “exclusive hand loomed decorative fabrics.” She designed upholstery and drapery fabric, including some that were translated into power-loom production, and her work included upholstery samples for a Boeing airplane. Her fabrics for Isabel Scott were mainly of natural fibers, including ramie (a cotton-like fiber native to East Asia), but she also worked with new mid-twentieth-century materials like Fiberglas and the resistant Saran fiber, a synthetic polymer. A 1956 New York Times article on the fall home design collections noted that Katherine Choy “weaves a piece of fabric in varying thickness to obtain the right ‘hang.’”

The textured brown and black wool with metallic thread fabric hanging in the exhibition at NOMA is on loan from the Newcomb Art Museum at Tulane University and is thought to be a gift to Newcomb from Choy’s friend and fellow artist John Clemmer (American, 1921–2014).

Though Katherine Choy’s legacy is one of a boundary-pushing ceramicist in the mid-1950s, it is clear that she considered herself an artist in many media. A catalogue published by NOMA this October will consider the multidisciplinary aspects and many artistic connections of Katherine Choy’s career, and how she found voice for artistic expression, color experimentation, and form in metal, paint, stone, and textiles, in addition to the ceramics that made her famous.

One has to wonder—if her life had been longer and if the textiles had more material permanence—if Katherine Choy’s artistic legacy may have been expression and reinvention in fabrics, rather than in clay. As Katherine Choy put it in her own words, through Isabel Scott’s 1956 press release about the artist joining the design team: “weaving offers the artist an immense opportunity for complete expression; and that at long last she has found the medium which inspires her to express fully her own creative capabilities and gives her great personal satisfaction.”

The exhibition Katherine Choy: Radical Potter in 1950s New Orleans in on view at NOMA through April 23, 2023, and is curated by Mel Buchanan with Winston Ho. The exhibition is supported by the Elise M. Besthoff Charitable Foundation, George Dunbar, and Charles L. Whited, Jr. Special thanks to the artist’s family, Reena Kashyap and the Clay Art Center, and the Newcomb Art Museum.