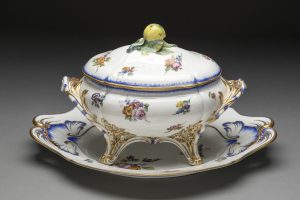 Porcelain imported from China was one of the most prized commodities in sixteenth- and seventeenth-century Europe. Europeans had not yet figured out the secret formula to produce a pure white ceramic that was stretched so thin it became translucent to light. The earthenware and stoneware clays used in Europe could not compete with Chinese porcelain’s delicacy, so powerful European rulers and commercial interests supported a century’s long scientific quest for porcelain. By the eighteenth century, when this magnificent Rococo-style Covered Soup Tureen was made in a French royal factory, Europeans had developed porcelain that could artistically compete with their Chinese inspirations.

While fired pottery traditions date to prehistoric times worldwide, true porcelain is thought to have first been made in China during the Han Dynasty (206 BCE–220 CE). In 851 CE, the Middle-eastern trader Suleiman recorded “They have in China a very fine clay of which they make drinking vessels as fine as glass; one can see the liquid contained in them.” By the Song Dynasty (960–1279), Chinese ceramicists had perfected the art of firing the right type of clay (kaolin) to hot kiln temperatures. 1260° celsius or higher is needed to produce the “vitrified” (glass-like) marvel of porcelain. China’s treasured porcelain–along with tea, lacquer, silk, and spices–was a major part of East-West trade from the 1500s through the 1700s.

The European breakthrough for porcelain came with well-known drama in the early years of the 1700s. The powerful Elector of Saxony, Augustus II the Strong (1670–1733) held alchemist Johann Friedrich Böttger imprisoned in Dresden until he could mutate base metals into gold to refill royal coffers. Desperately experimenting, Böttger and his supervisor Walther Von Tschirnhaus developed high-fired red stoneware for heat-resistant crucibles for gold making. Though eluded by the magical alchemy of gold, in 1709 the German team perfected translucent “white gold” porcelain when they switched from the red to a white body clay. Their local source of kaolin clay was discovered near Meissen, where the Augustus II the Strong quickly established a factory to start production of Europe’s first porcelain. The Meissen Porcelain factory has been in continual production since 1710.

Although Meissen made enormous efforts to protect their secrets, spies and defecting workmen expanded the knowledge of porcelain formulas and processes to Vienna and Venice. At the same time, experiments throughout Europe produced ceramics similar to true porcelain in England and France. At Saint-Cloud and Rouen in the 1690s, French faience (tin-glazed earthenware) factories experimented with “soft-paste” porcelain. This formula produces objects that are delicate, white, thin, and able to be beautifully glazed, but the clay cannot be fired as hot as “hard-paste” porcelain can because it lacks kaolin.

A soft-paste porcelain factory founded in 1740 in the royal château of Vincennes, France would come to dominate the European lust for fine porcelain through the remainder of the eighteenth century. From its first years in a suburb east of Paris, the Vincennes factory enjoyed the privileged status of Manufacture royale, with patronage from King Louis XV and his royal mistress Madame de Pompadour. Around 1745 Louis granted Vincennes the privilege to make porcelain “in the manner of Saxony, painted and gilded, with human figures,” referring to the factory’s main competitor at Meissen. In 1756, outgrowing their original location, the factory moved to a new facility near the Palace of Versailles, west of Paris in Sèvres. The Manufacture Nationale de Sèvres remains there to this day.

The large porcelain Covered Tureen and Plate (Terrine du Roi) in NOMA’s collection was made in 1754/55, in the last years at the original Vincennes location. The clear marks on this tureen, and its mate in the collection of the Minneapolis Institute of Art, reveal part of the factory’s success. Vincennes, and then Sèvres, was known for engaging the most talented French artists to design shapes and for the detailed ornament on their porcelain. NOMA’s elegant Rococo tureen shape was the work of Jean-Claude Duplessis, a multi-talented artist who was appointed orfèvre du roi (goldsmith to the King) in 1758. For the royal manufactory, Duplessis was director of models from 1748 to 1774, and he also advised on colors and from his own workbench produced gilt bronze mounts for the finest porcelain objects. NOMA’s Covered Tureen carries the mark for the decorator Pierre-Joseph Rosset, a painter specializing in the delicate flowers that were popular during the mid-eighteenth century Rococo style.

The Sèvres factory flourished through the eighteenth century even after the abolishment of a royal system of support with the French Revolution. Through the nineteenth century the factory remarkably stayed at the avant garde of European porcelain production, though always in competition with Meissen. Sèvres offered an astounding array of artistic styles to suit quickly moving consumer taste. Advancing the traditions of the ancient Chinese porcelain medium, through the nineteenth century Sèvres pushed technical achievement, extending the porcelain to new extremes in color, scale, and delicacy.