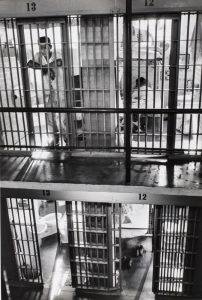 Danny Lyon took his first photography gig when he joined the Student Nonviolent Coordinating Committee (SNCC), an organization of young activists that orchestrated sit-ins and carried on the Freedom Rides during the Civil Rights Movement. With leader James Forman and other photographers, Lyon helped make photography an important part of SNCC’s strategy by documenting the struggle from the inside and publishing photos that favored intimate and inspirational moments over spectacle. Lyon carried this method, and a penchant for social justice, throughout the rest of his career immersing himself in the communities he photographs and getting to know his subjects. By the 1970s this kind of participant-observer photography aligned easily with the “New Journalism” espoused by writers like Tom Wolfe and Hunter S. Thompson.

Beginning in 1967, Lyon gained access to the prison system in Texas and began documenting the lives of people in six of the state’s most notorious facilities. He published his photographs as the book Conversations with the Dead (1971), which included copies of prison records as well as letters and artwork from incarcerated men. Lyon built personal relationships with many of the men he photographed. Through the combination of photographs and ephemera, Lyon contrasted the creativity and intelligence of his subjects with the cold and inhumane conditions in which they were held. In the 1971 foreword, Lyon wrote that he wanted to “make a picture of imprisonment as distressing as I knew it to be.”

This photograph (with clear formal similarities to Alfred Stieglitz’s The Steerage (1907)) shows the restrictive, close quarters at the Ramsey Prison Farm. Ramsey was built in 1908, and its architecture, in part, reflected nineteenth-century theories about incarceration and rehabilitation. Lyon’s vantage allows him to show, on the lower level, the shallow depth of those cells. One man on the upper level leans against the door to his cell, perhaps for lack of anything else to do. On the right, we can see that another occupant has done their best to replicate the comfort of a home with pictures and a mirror on the wall. Throughout the photograph the repetition of cell bars establish a pattern that holds our eye, but also calls up a feeling of claustrophobia for the viewer.

In the 2015 reissue of Conversations with the Dead, Lyon lamented that his work in Texas failed to encourage any real reform of the industrial prison complex. He wrote, “Prison is part and parcel of America, part of the American way. It’s like a cancer inside us.” The US prison system has changed since the 1970s in a number of ways, including the privatization of prisons for profit.  Louisiana routinely claims the highest per capita incarceration rate among the fifty states. Prison and jail living conditions, the rights of the incarcerated, and rehabilitation are among the most pressing issues we face in contemporary society. Photographs like this one by Danny Lyon, (or others by New Orleans photographers Chandra McCormick, Keith Calhoun, and Deborah Luster) keep these concerns in our vision.