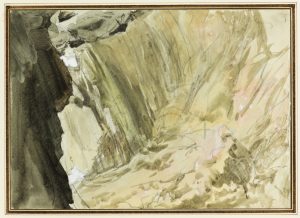 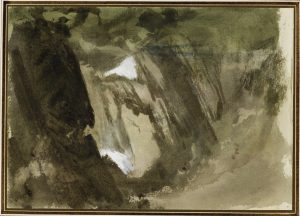 Sometime in the 1830s, a young John Ruskin walked into a cave with a box of paper, pencils and paint. Ruskin stationed himself near the mouth of the cave but at an oblique angle so that he could observe the shifting effects of light as it entered the cave. Working quickly, Ruskin sketched out a rough outline of the general forms of the rocks surrounding the mouth and the opposite wall which he then embellished with watercolor and gouache touches. He waited, then later, he repeated the process, this time foregoing the pencil sketch. Darkness, descending on the cave, had perhaps obscured even the most general of forms. The end results, two drawings made moments apart at the same place, show us nature and time in the process of unfolding. As light shifted, the environment changed, and this change was artfully, and rather abstractly, recorded by Ruskin’s brush. This was a novel kind of representation, a new way of looking at the world combined with new artistic practices.

There have been moments throughout history when humanity’s relationship to nature has shifted dramatically. These cultural and philosophical shifts are always accompanied by new ways of depicting nature. Just fifty years before Ruskin’s excursion into the cave, his way of looking at landscape was virtually unthinkable: eighteenth-century landscapes were built upon the classical ideal, timeless representations of a controlled environment. By the time Ruskin made his drawings, the representation of nature had shifted to landscape as immediate, natural, uncontrollable and fixed in time. This shift in the depiction of landscape in the artistic world coincided with—and was informed by—debates about the earth’s timeline. Beliefs that the earth had been created, cataclysmically, about six thousand years before were countered by geologists who proposed that the earth had developed gradually, over millions of years. This rapid expansion of the earth’s age had a profound effect on the human psyche: suddenly, our presence on earth was ripped from a position of great authority and tossed into the chasm of the growing geologic record, a very small speck in the deep sea of time. At the same time, nature, an ever-evolving, grand old entity became the subject of greater respect and admiration. In artistic terms, the concept of the “ideal landscape” no longer seemed to make sense. Crooked trees, broken trunks and light-dappled caves became the new standard of beauty, as if to proclaim that nature, in all its imperfection, was already perfect. This new conception of nature demanded artistic practices that allowed for greater spontaneity and immediacy. Painting in the studio, away from the subject, was cast aside in favor of making studies outside, directly from nature, sketches made en plein air. It was the synthesis of prevailing notions about humanity’s relationship to nature, and the nature of landscape representation that ultimately led Ruskin into the cave in the 1830s.