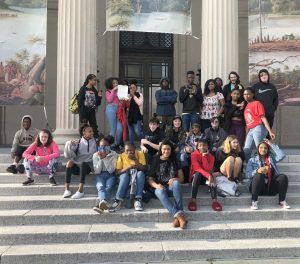 Land is arguably the most sought-after resource on our planet. It has been the source of everything from the impetus for wars to the foundation of oppression and a sacred fabric within spiritual practices. Unfortunately as a result of collective mistreatment and devaluation of this resource, like so many of the planet’s treasures that existed before humans, it is one that is becoming progressively more scarce.

This is especially the case in places such as New Orleans and Louisiana where the land is constantly retreating to water. As conversations and work around environmental issues increase around the city, region and world, the ways in which we learn about the histories, and particularly controversial narratives about land, are more important than ever. Inventing Acadia: Painting and Place in Louisiana, an exhibition curated by Katie Pfohl, was an exceptional example of removing the veil by presenting 19th-century Louisiana paintings in way that allowed for complex conversations not only around land, and its loss, but additionally the buried stories of marginalized individuals who were oppressed on this soil. The exhibition included a robust lineup of programs that sparked dialogue around topics such as slavery, environmental sustainability, and the oil industry’s impact on the Gulf South.

In conjunction with the exhibition, contemporary artist Regina Agu produced Passage, a site-specific installation in NOMA’s Great Hall. A panoramic photo measuring more than 100 feet wrapped around the entire hall as a composite image of Louisiana’s watery landscapes, with evidence of human impact upon these wetlands. The piece was produced through a collaboration between NOMA and A Studio in the Woods, a local artist residency program that is dedicated to the intersections of art and the environment. Passage explored complex issues related to land loss, slavery, and colonialism.

The nature of Passage and Inventing Acadia created the potential for a synergetic partnership with New Harmony High School—a public open-enrollment school now in its second year of operation and coincidentally half a mile walk straight down Esplanade Avenue from NOMA’s front door. The school was one of the 2016 winners of the XQ: Super School Project, which provides winning proposals with a $10 million grant over five years. Blending a unique culture and curriculum model with a focus on coastal restoration and preservation, the school was the perfect partner for the exhibitions.

In January twenty-five ninth-grade students visited NOMA for a day with Agu. Pfohl led a tour of Inventing Acadia followed by an exploration of themes in Passage. The following week Youth Programs Coordinator Danielle Rives and I visited New Harmony twice. On the first day we dove deeper into the themes from the exhibitions and we discussed the controversial histories surrounding museums, NOMA, and the land upon which the museum exists. We also provided additional examples of artistic works relating to land use along with prompts that gave the students an opportunity to think about what type of piece they would create in response to the land and its stories. On the second day, we explored the surrounding neighborhood and worked with students to create their respective works of art.

The culmination was a “pop-up group exhibition” that was presented in NOMA’s Art Studio the following week. The students traveled to the museum that morning to see their work displayed along with their names and an artist statement. The exhibition was on view the entire day and was visited by other groups of New Harmony students along with some parents.

Each of the students’ works were a beautiful confluence of time, thought, inspiration, and dedication and it was exciting to watch their responses to seeing their works and words displayed in this manner. It further affirmed the need for collaborations like this and supportive spaces in which youth are able to share their thoughts and perspectives on the world’s current conditions. As NOMA treads into a more inclusive institutional future, I truly look forward to the opportunity to continue these types of partnerships that are able to transform the way NOMA exists on its complex land and how the museum serves the city of New Orleans.

This program was a part of NOMA’s Creative Assembly initiative, which is generously supported by The Wagner Foundation and The Collins C. Diboll Private Foundation.