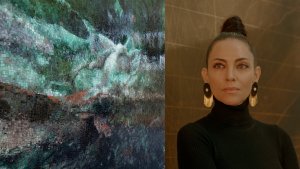 Viñales (Mayombe Mississippi) (detail) in the sculpture garden of the New Orleans Museum of Art. The work is part of a series begun by Teresita Fernández in 2015, after her first visit to Cuba.

With the debut of the six-acre expansion of the Sydney and Walda Besthoff Sculpture Garden in May of 2019, thousands of visitors have been entranced by a 60-foot-long ceramic-tile mural that forms an exterior wall of the garden’s Pavilion. Artist Teresita Fernández was commissioned to create Viñales (Mayombe Mississippi) for the site. Her works are noted for their  ability to capture the essence of formless elements such as fire, water, and air. She will speak at The Helis Foundation Artist Talk on Wednesday, January 15, from 6 to 7:30 pm. (Admission is free to all Louisiana residents on Wednesdays courtesy of The Helis Foundation.)

Fernández spoke with NOMA Magazine as the mural was being created in 2018.

The piece was designed to feel like an extension of the sculpture garden, emerging from the building itself and dissolving into the surrounding landscape. I wanted to create something that would be a marker, giving you a sense of you are here.

The artwork is conceived as a landscape within a landscape. When I use the word landscape, I am not referring to it in the generic way of a framed vista or a picturesque scene, but rather more expanding the idea of  landscape in a conceptual way that speaks to the history of people in places. So there are many cultural and historical references associated with that idea of landscape that are integral to the piece.

When I first met Sydney and Walda Besthoff, who have been extremely supportive of the complexities of  this work, and an absolute pleasure to work with, they were very interested in a body of work that I did a couple of years ago called Viñales, which was a reference to a rural landscape in Cuba where my family is from. I wanted to draw inspiration from that piece, but I wanted to make it very specific to New Orleans. This commission is very much about contextualizing  New Orleans as a global city and, in many ways, the northernmost Caribbean city. The conceptual heart of the work really is about connecting New Orleans with Havana and with Africa and using the landscape as a vehicle for making that connection.

The imagery of the work comes from a piece of malachite rock from the Democratic Republic of Congo, a rock that is literally part of and from a specific landscape. The image has been transformed to feel like an immense, expansive landscape, but it actually originates  from a very small rock.

The piece is made from a vitreous material—hundreds of thousands of tiny, glazed ceramic pieces that are meticulously assembled to create the overall image.

This highly reflective surface will not only be reflective of the changing atmospheric conditions and the shifting light of  New Orleans at different times of the day, but it will also be a mirror to visitors so that when you look at this landscape, you also see your own reflection on the surface of the piece. In many ways you become the figure in that landscape.

▶ READ MORE IN THIS PROFILE FROM THE NEW YORK TIMES