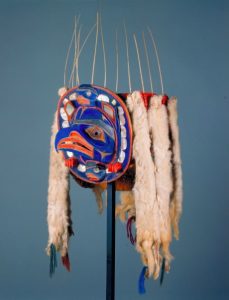 The Bella Coola, also called the Nuxalk, are among Canada’s 634 recognized First Nations of Indigenous peoples. They have long inhabited the Pacific coast of what is now the province of British Columbia. Petroglyphs in the Bella Coola Valley date back 5,000 to 10,000 years. Maritime settlements traditionally consisted of groups who traced their lineage to a group of mythical first ancestors. According to tribal beliefs, these ancient forbears, equipped with tools and spiritual knowledge, descended from a mountaintop and established villages at each base. Through marriage, a network of descent groups developed that linked the villages. Housing consisted of communal cedar-plank dwellings that were large enough to house as many as six couples and their children. The native language of the Nuxalk is among the most endangered in the world, with fewer than ten documented fluent speakers in 2019.

The Nuxalk are renowned as carvers, with a mask-making tradition that includes physical representations of supernatural beings with animal-like features of species common to the tribe’s home region, including owls, killer whales, ravens, and wolves. This headdress in NOMA’s Native American art collection depicts a predatory bird. Masks were used in the representation of ancestors of high rank, shamanistic healing, and ceremonial dances that reenacted myths.

During the nineteenth century, frontlet headdresses became the principal style of ceremonial headdress among Indigenous peoples in the Northwest Coast of North America. They were worn by high-ranking individuals as a means of conveying a story rather than taking on a mythical identity as is done with masking. In a dance ritual, the carved and tethered bird would be shaken out of the crown of the headdress, causing the carving  to drift and swirl around both dancer and audience. Nuxalk carvings often represent birds, though no avian materials were used in the creation of this example.

Haliotis, better known as abalone, is a common shellfish in the coves of the Pacific Northwest. Generally collected as a food source in spring, women did most of the harvesting by prying the mollusks off rocks. Abalone was used for trade, and the shells were used decoratively for necklaces, head dresses, money, ornaments, cutting tools, eating implements, and gambling chips.

Ermine are short-tailed weasels whose fur changes color seasonally, becoming white in the winter snow with a black tip on the tail. Fur trading of these highly prized pelts became a source of income for the Nuxalk after European encounters in the eighteenth century. A Nuxalk tale tells of animals taking shelter in holes or caves in fear of a wrathful Sun deity. The ermine’s tail was left exposed and thus was scorched black for eternity.

Walruses are large pinnipeds — fin-footed, semiaquatic marine mammals — found in frigid seas of the Arctic zones. Their whiskers, known as vibrissae, can grown up to a foot long and average 400 to 700 in total count on a single specimen. Highly sensitive to touch, they can tell a walrus when it has come into contact with a food source. Walrus fat is rendered into a cooking oil, a key ingredient in preparation for many traditional foods of the Nuxalk.

Nuxalk art is in the collection of major museums around the world. In 2014, as the Denver Broncos and Seattle Seahawks vied for the NFL championship, a friendly wager was placed between directors of art museums in both of those cities. If Denver won, the museum would loan a bronze sculpture by Frederic Remington titled The Broncho Buster. Likewise, Seattle would have lent a Nuxalk carving of a raven mask, which resembled the Seahawk’s logo. A hereditary leader of the Nuxalk took umbrage with the use of the mask as a gambling token and asked the museum to reconsider the offer. The Denver museum complied, apologized, and agreed to meet with the Nuxalk to discuss the sensitive nature of displaying works by Indigenous peoples. Seattle won the Super Bowl and a six-paneled Japanese screen from 1902 titled Sound of Waves by artist Tsuji Kakō was loaned instead.