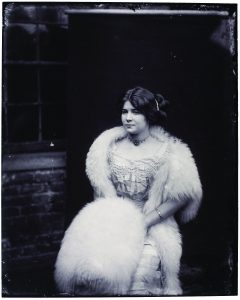 Portraits of women working as prostitutes in Storyville, long attributed to Ernest Jean Bellocq, have become some the most indelible images of New Orleans, making Bellocq (1873-1949) one of the most recognized photographers in the history of the city. Yet, we know remarkably little about the photographer, long the subject of local legend and popular caricature. Attributed To: Photographs by E.J. Bellocq parses some truths from the myths surrounding his work and life, while considering how his photographs fit into the visual culture of New Orleans in the early twentieth century. This companion focus exhibition to Lee Friedlander in Louisiana will remain on view in the second-floor A. Charlotte Mann and Joshua Mann Pailet Gallery through August 12.

During his lifetime, Bellocq worked as a commercial photographer and occasionally for the Archdiocese of New Orleans. He achieved posthumous notoriety after photographer Lee Friedlander purchased a cache of glass-plate negatives found among Bellocq’s belongings and exhibited them at the Museum of Modern Art in 1970 (and subsequently at NOMA). The negatives, likely produced between 1911 and 1913, show women in the rooms where they lived and worked, wearing a range of expressions, and in states of dress that ranged from evening gowns to nothing at all. Speculation persists about Bellocq’s purpose in making the portraits, as well as to the relative agency of the women who sat for his camera in the context of sex work in Storyville, New Orleans’ legal vice district that operated from 1897 to 1917. Furthermore, it remains uncertain if Bellocq ever made prints from any of these Storyville negatives.

Friedlander used period techniques to approximate how those photographs might have looked had Bellocq printed them. Friedlander described Bellocq as an “ultra-clean realist,” with admiration for the earlier photographer’s ability to crisply represent the truth of a moment, space, and person. Attributed To will feature the most striking Bellocq photographs printed by Friedlander in NOMA’s permanent collection, with attention to their decidedly mixed authorship. The exhibition will also include architectural photographs printed by Bellocq, encouraging visitors to consider how they differ from the Storyville portraits and determine for themselves whether it is possible to identify where the real Bellocq ends and the legend begins.