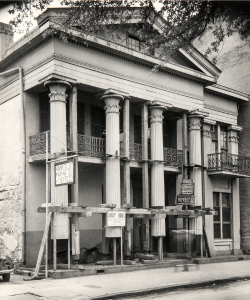 Editor’s Note: Suspension (#2) by Clarence John Laughlin is among the many photographs on view in the exhibition Past Present Future: Building Photography at the New Orleans Museum of Art through March 17, 2019. The image was added to NOMA’s permanent collection in 2017 thanks to a donation from Abry Brothers, Inc., a New Orleans-based shoring contractor in business since 1840 that shares a special relationship with this photograph made in 1946.

Clarence John Laughlin is considered one of the pioneering American surrealist photographers. Born in Lake Charles, Louisiana, in 1905, Laughlin moved to New Orleans with his family as a young child. He became a self-taught photographer and was employed by the WPA’s Historic Buildings Survey to document Louisiana’s historic architecture during the Great Depression. Louisiana’s built environment, particularly the decay of 19th-century plantations, cemeteries, and New Orleans’ raffish neighborhoods and demolition lots, became the primary focus of Laughlin’s artistic output.

Laughlin experimented with multiple exposures and other techniques to depict ruination caused by time and neglect and, in his words, “to probe the intangible psychological jungle in which every object is enmeshed.” Laughlin wrote, “I am not primarily interested in the camera as a recording mechanism, but, rather, in its possibilities as an extension of the inner eye.”

One Laughlin print up for sale at Skinner Auction House in 2016 caught the eye of Russell Lord, the Freeman Family Curator of Photographs, Prints, and Drawings. The gelatin silver print, dated 1946 and titled Suspension (#2), depicts a neoclassical building embellished with four fluted Corinthian columns with the bases mysteriously removed. While Laughlin often used multiple exposures or combination printing to produce otherworldly effects in his photographs, here he points to the surreal nature of the real world in an unmanipulated “straight” photograph, in which the large building appears to float in space. In another charming detail, a blurry “ghost figure,” the result of a pedestrian in motion during the exposure, strides along the sidewalk. The grand building appears to be a flophouse, with advertisements for “Rooms for Lease” and “Hotel” tacked to wood scaffolding, but most familiar to many New Orleanians is a sign indicating the building is under construction by Abry Bros., a shoring contractor founded in the mid-19th century that remains one of the city’s oldest family-operated businesses.

Lord approached the sixth-generation owners of Abry Brothers, who were delighted to purchase the photograph for NOMA.

“Having opened our doors so long ago, in 1840, Abry Brothers’ history and that of the Crescent City are inextricably linked,” said company president Greg Abry. “Our connection to the community through this historic photo is a great source of pride for our business, our family, and will be for generations to come in the art museum.”

Lord added, “I am delighted that so many elements of New Orleans came together to make this acquisition possible. New Orleans’ best recognized photographer, its distinct architecture, an established local family business,, and even the locally specific practice of raising and shoring, all combined to bring this treasure into our impressive photography collection.”