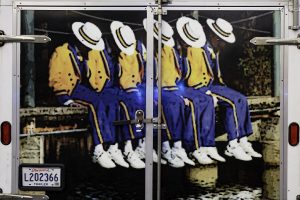 Join Curatorial Fellow Brian Piper for a video tour of highlights in the photography exhibition You Are Here: A Brief History of Photography and Place by linking to NOMA’s Instagram account. Piper discusses various themes and works in the exhibition that question photography’s ability to accurately depict a location, as well as its manipulative qualities that allow photographers to distort a place.

In the weeks ahead, Louisiana-based photographers will offer their perspective on the exhibition in a series of in-person Gallery Talks. (Wednesdays are free to all Louisiana residents courtesy of The Helis Foundation.)

Monique Verdin is a filmmaker, photographer, and interdisciplinary storyteller who has intimately documented the complex interconnectedness of environment, culture, climate, and change in southeast Louisiana. She is director of the Land Memory Bank & Seed Exchange and a former United Houma Nation Tribal Council member. She serves within the core leadership circle Another Gulf Is Possible Collaborative among brown (Indigenous, Latinx and Desi) women, from Texas to Florida, working to envision just economies, vibrant communities, and sustainable ecologies in the Gulf South. Verdin’s film My Louisiana Love won Best Feature Documentary at the 2015 imagineNATIVE Film Festival.

Beondé is a visual artist living in New Orleans. She holds an MFA from Tulane University and BFA from the School of the Museum of Fine Arts, Boston, in partnership with Tufts University. She has received a Traveling Fellowship through the Museum of Fine Arts, Boston, a Light Work Grant, an Artist Grant through The Canary Lab at Syracuse University, and a fellowship through the Constance Saltonstall Foundation for the Arts. Her has been exhibited across the United States and Western Europe and is in the permanent collections of BNY Mellon, Light Work, and the Newcomb Museum of Art. She has been featured in such media outlets as VICE, DesignMilk, and iGNANT.

Traviesa is a photographer and artist living in New Orleans since the late 1990s. He has had numerous solo and group exhibitions in New Orleans, Philadelphia, Chicago, and New York. In 2005, The Times-Picayune voted his Katrina photo-sign installation best art show the year. He taught Photoshop at NOAFA from 2005-2010. Traviesa is a founding member of The Front gallery and released his first book, Portraits with a concurrent exhibition at The Front during October and November of 2009. As part of the annual Photonola series of exhibitions across New Orleans, Traviesa received the New Orleans Photo Alliance’s inaugural Michael P. Smith Grant Award. The Ogden Museum of Southern Art also exhibited a selection of his portraits from the book. He most recent solo shows, “Beacons Abound” and “Kinda~Deathy”, opened in April 2011 and January 2012 at The Front, respectively. In 2012,he was commissioned by the Contemporary Arts Center to make a site-specific mural installation of one of his photographs, and, while currently pursuing an MFA at Tulane, he is making more site-specifice photo installations that incorporate additional framed elements. His work is collected privately around the United States and publicly in New Orleans by the Ogden and the New Orleans Museum of Art.

Abdul Aziz is a freelance photojournalist based in New Orleans. Widely traveled, his images document global communities ranging from the Middle East and Africa to Asia and the United States. His work in documentary filmmaking has addressed such issues as race, exploitation of indigenous peoples, social justice, and unfair labor practices. He co-produced the award-winning documentary Member of the Club, a film about black debutantes in New Orleans.