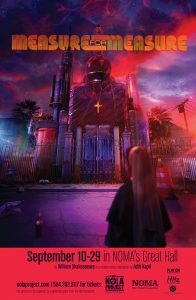 The NOLA Project returns to NOMA’s Great Hall for twelve nights in September to stage one of William Shakespeare’s lesser-known plays, Measure for Measure, originally written in 1603/04. Considered by scholars to be one of the Bard’s “problem plays,” where a dilemma is solved over the course of several acts, Measure for Measure addresses themes central to human nature in a battle of morality versus depravity, and the role of leniency in moral justice overriding civil law. The NOLA Project will stage an modern-verse update of the play written by Aditi Kapul, a writer, director, and actress of Bulgarian and Indian descent, who was part of a project at the Oregon Shakespeare Festival that allowed modern playwrights an opportunity to translate Shakespeare’s works into contemporary modern English. Participants in this “Play On Shakespeare” workshop — the majority of whom were women or minorities — were charged with bringing the same level of dramatic pressure and rigor of language to their work as is present in the originals, with the goal of deepening audiences’ understanding and engagement with Shakespeare.

PURCHASE TICKETS FOR ALL DATES OF MEASURE FOR MEASURE

In advance of the premiere, Mark Routhier, director of the play, spoke with David Johnson, editor of NOMA Magazine.

How did you and The NOLA Project become aware of this modern adaptation of Measure for Measure?

The Oregon Shakespeare Festival commissioned thirty-six playwrights — most of them women or minorities — to update all thirty-six of Shakespeare’s plays. I was really interested in doing Henry V or Richard III, something that might have box office appeal. A.J. Allegra, artistic director of the The NOLA Project, and I had been talking about Measure for Measure, since he was teaching it at the time. One of our company members had said, We should do this play. There’s a lot of #MeToo stuff going on in it. So A.J. pushed it over onto my table and I started reading it. The #MeToo stuff was extremely well-written, in verse and clear. The comedy of the original play was to me almost unrecognizable. The language was so out of date. I was having a tough time reading it.
I was trying to figure out what these full characters were doing, what the clowns were doing and I couldn’t make heads or tails of it. Honestly. I mentioned to A.J. that I wondered, first of all, if there was a Measure for Measure out there that would have updated the language of the comic portion of the play in a way that made it more accessible to a contemporary audience. Because if I didn’t get it, how are they going to get it?

Aditi Kapil had written the modern-verse update as part of the Oregon project, and the dramaturg was Liz Engelman. I read the new version side-by-side with the original, and it became accessible without taking too much artistic liberty. It was funny. Oregon Shakespeare Festival had set aside money to launch this play, so we were off to the races. 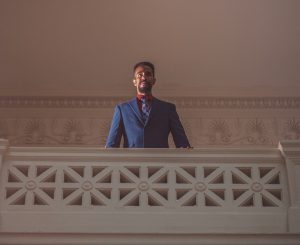 This play is promoted as one that addresses topics and themes in our time — particularly the #MeToo Movement. How is that accomplished?

Well, particularly right now, with what’s been going on with Harvey Weinstein and Jeffrey Epstein, issues of sexism are central to the story. Basically, what happens is that the Duke in Vienna has decided that he has allowed laws about sexuality to get too lax for too long and that the city is getting ridiculously debaucherous and bawdy. So he gets this idea that he’s going to go off and hire this gentleman, a judge named Angelo, who has a sterling reputation, to take his place and to start laying down the law, which he does immediately. He makes an example of this kid, Claudio, who has impregnated his girlfriend out of wedlock and says that he’s going to chop his head off. And Claudio asks his buddy to go grab his sister, Isabella, who’s about to go into the nunnery and ask her to use her intellect and feminine wiles to try to get Angelo to change his mind.

When she goes to get him to change his mind, Angelo, who has essentially been asexual up until now, is so turned on by her intellect and the way she argues for her brother that he tells her that he will hold off on the execution for another day and that she should come back tomorrow. During that time he decides that he wants her. So when she comes back, he basically, without giving the story away, makes an offer that he’ll save her brother’s life if she sleeps with him. And the language between the two of them in that particular scene could have been ripped from any hotel room, from the awkward situation that any of the actresses in the Weinstein situation would have had to deal with. It also has echoes of the Clarence Thomas hearings. It’s really outlandish. It’s really uncanny how nothing has changed in 400 years, when Measure for Measure was first written.

How does NOMA’s Great Hall lend itself to theatrical productions?

The space that I learned theater in was called a modified thrust, which is an audience on three sides. And the Great Hall is set up similarly, with the backspace of a beautiful staircase, that splits off to the second floor. It really provides a very natural space where we don’t have to build platforms — we don’t have to really build anything. The space is absolutely available to us. There is a majestic quality to the Great Hall that fits with Shakespeare. And Shakespeare was essentially a screenwriter. He goes out into the fields, there’s a big war, he goes into the woods, he goes into a courtroom, he goes into bedrooms, and it’s all happening in the same play. The Great Hall gives us room to do all of these things.

NOMA members receive discounted play tickets to productions by The NOLA Project. Join NOMA today and enjoy this perk, along with other year-round benefits.