NOMA’s Learning and Engagement team is excited to present monthly suggested reading lists for all ages based on a theme or exhibition, in partnership with Octavia Books. Direct links for ordering books are found in the listings below. Our first theme of the new year is Circles. 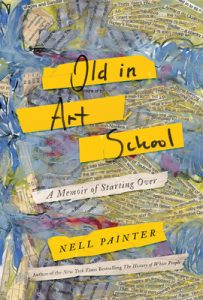 Old In Art School: A Memoir of Starting Over by Nell Painter

Following her retirement from Princeton University, celebrated historian Dr. Nell Irvin Painter surprised everyone in her life by returning to school—in her sixties—to earn a BFA and MFA in painting. In Old in Art School, she travels from her beloved Newark to the prestigious Rhode Island School of Design; finds meaning in the artists she loves, even as she comes to understand how they may be undervalued; and struggles with the unstable balance between the pursuit of art and the inevitable, sometimes painful demands of a life fully lived.

A wildly imaginative novel about a man who is reincarnated over ten thousand lifetimes to be with his one true love: Death herself.

Milo has had 9,995 chances so far and has just five more lives to earn a place in the cosmic soul. If he doesn’t make the cut, oblivion awaits. But all Milo really wants is to fall forever into the arms of Death. Or Suzie, as he calls her.

More than just Milo’s lover throughout his countless layovers in the Afterlife, Suzie is literally his reason for living—as he dives into one new existence after another, praying for the day he’ll never have to leave her side again.

But Reincarnation Blues is more than a great love story: Every journey from cradle to grave offers Milo more pieces of the great cosmic puzzle—if only he can piece them together in time to finally understand what it means to be part of something bigger than infinity. As darkly enchanting as the works of Neil Gaiman and as wisely hilarious as Kurt Vonnegut’s, Michael Poore’s Reincarnation Blues is the story of everything that makes life profound, beautiful, absurd, and heartbreaking.

Because it’s more than Milo and Suzie’s story. It’s your story, too.

When Mae Holland is hired to work for the Circle, the world’s most powerful internet company, she feels she’s been given the opportunity of a lifetime. The Circle, run out of a sprawling California campus, links users’ personal emails, social media, banking, and purchasing with their universal operating system, resulting in one online identity and a new age of civility and transparency. As Mae tours the open-plan office spaces, the towering glass dining facilities, the cozy dorms for those who spend nights at work, she is thrilled with the company’s modernity and activity. There are parties that last through the night, there are famous musicians playing on the lawn, there are athletic activities and clubs and brunches, and even an aquarium of rare fish retrieved from the Marianas Trench by the CEO. Mae can’t believe her luck, her great fortune to work for the most influential company in the world–even as life beyond the campus grows distant, even as a strange encounter with a colleague leaves her shaken, even as her role at the Circle becomes increasingly public. What begins as the captivating story of one woman’s ambition and idealism soon becomes a heart-racing novel of suspense. 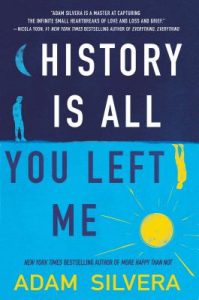 History is All You Left Me by Adam Silvera

When Griffin’s first love and ex-boyfriend, Theo, dies in a drowning accident, his universe implodes. Even though Theo had moved to California for college and started seeing Jackson, Griffin never doubted Theo would come back to him when the time was right. But now, the future he’s been imagining for himself has gone far off course.

To make things worse, the only person who truly understands his heartache is Jackson. But no matter how much they open up to each other, Griffin’s downward spiral continues. He’s losing himself in his obsessive compulsions and destructive choices, and the secrets he’s been keeping are tearing him apart.

If Griffin is ever to rebuild his future, he must first confront his history, every last heartbreaking piece in the puzzle of his life. 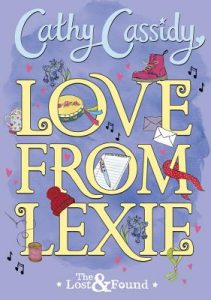 Love From Lexie by Cathy Cassidy

Ever since Lexie’s mom vanished, her world hasn’t stopped spinning. A new home, a new school—even a new family, but Lexie never gives up hope that her mom will come back and writes her letters every day to tell her all about her new life. There’s plenty to tell—the new group of misfits she calls friends, the talent for music she never knew she had and the gorgeous boy with blue eyes and secrets to hide. But her letters remain unanswered and she’s starting to feel more alone than ever. Lexie’s about to learn that sometimes you need to get lost in order to be found.

Stanley Yelnats is under a curse. A curse that began with his no-good-dirty-rotten-pig-stealing-great-great-grandfather and has since followed generations of Yelnatses. Now Stanley has been unjustly sent to a boys’ detention center, Camp Green Lake, where the boys build character by spending all day, every day digging holes exactly five feet wide and five feet deep. There is no lake at Camp Green Lake. But there are an awful lot of holes.

It doesn’t take long for Stanley to realize there’s more than character improvement going on at Camp Green Lake. The boys are digging holes because the warden is looking for something. But what could be buried under a dried-up lake? Stanley tries to dig up the truth in this inventive and darkly humorous tale of crime and punishment—and redemption. 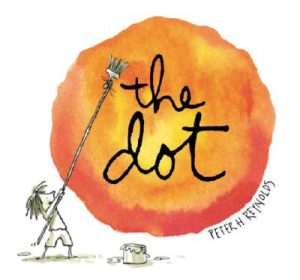 The Dot by Peter Reynolds

Her teacher smiled. “Just make a mark and see where it takes you.”

Art class is over, but Vashti is sitting glued to her chair in front of a blank piece of paper. The words of her teacher are a gentle invitation to express herself. But Vashti can’t draw – she’s no artist. To prove her point, Vashti jabs at a blank sheet of paper to make an unremarkable and angry mark. “There!” she says.

That one little dot marks the beginning of Vashti’s journey of surprise and self-discovery. That special moment is the core of Peter H. Reynolds’s delicate fable about the creative spirit in all of us.

This book is about Circle. This book is also about Circle’s friends, Triangle and Square. Also it is about a rule that Circle makes, and how she has to rescue Triangle when he breaks that rule. With their usual pitch-perfect pacing and subtle, sharp wit, Mac Barnett and Jon Klassen come full circle in the third and final chapter of their clever shapes trilogy.