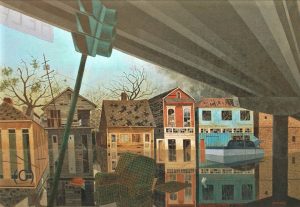 Roland Golden (American, 1931–2019), Claiborne Avenue, 2006, Acrylic on canvas, 34 x 50 in., Collection of the New Orleans Museum of Art and The Historic New Orleans Collection, Donation of Sydney and Walda Besthoff

Rolland Golden, a Louisiana artist whose prolific works across six decades ranged from bucolic depictions of southern landscapes to the wrenching aftermath Hurricane Katrina, died on July 1 at his home in Folsom. He was 87. The permanent collection at the New Orleans Museum of Art includes 132 drawings and paintings by Golden.

Born in New Orleans in 1931, Golden was among a generation of artists in the mid-20th century mentored by John McCrady, a noted regionalist who founded an art school on Bourbon Street in 1942. Golden, a Korean War veteran, enrolled at the academy in 1955 with financial aid from the GI Bill and became part of the thriving bohemian art colony in the French Quarter, befriending the likes of surrealist Noel Rockmore and Larry Borenstein, a gallerist whose Creole townhouse eventually became home to the Preservation Hall jazz band. Fellow graduates of the McCrady School of Art include Ida Kohlmeyer, Alan Flattman, and Henry Casselli.

Golden’s work was first displayed at the Delgado Museum of Art (now the New Orleans Museum of Art) in 1957 as part of an annual exhibition of the Art Association of New Orleans. In 1964, he caught the attention of Hollywood actor and art collector Vincent Price, who had been hired by Sears Roebuck to travel the nation in search of artists whose work could be reproduced for sale in the retailer’s department stores. Though initially wary of mass commercialism, the career break allowed Golden to achieve financial independence as a fine artist.

Throughout his childhood, Golden’s family moved frequently across the South, from Louisiana to Mississippi and Alabama and back again. “I didn’t realize it at the time,” Rolland told Southwest Art magazine in 1978, “but the beauty of the rural South was making quite an impact on my young mind.” These landscapes include familiar scenes of cotton fields, meandering rivers, sharecropper shacks, wildflower meadows, Spanish moss-draped woods, and lonely rural highways. Travel would expose Golden to other locales that he captured on canvas, from the Arizona desert and New England beaches, where he would spend summers, to the French countryside. In the 1970s, Golden’s work included two series with edgier themes. In Demolition by Neglect, he captured scenes of 19th-century buildings being razed in the Central Business District of New Orleans. His Civil War series of the same era drew parallels between the conflict in Vietnam and America’s violent rift in the 1860s. In 1976, Golden was invited by the Soviet Union to exhibit 51 of his works in four Russian cities, becoming the first living American artist to achieve a solo show in the communist nation during the Cold War.

Art writer Doug MacCash of The Times-Picayune | New Orleans Advocate described Golden as a “master of subtle surrealism.” He wrote in an obituary, “His watercolors, acrylics and oils were certainly romantic, though also quite wry. In Golden’s mature style, there were no normal borders. Blood-red skies magically bled into blood-red barns, checkerboards morphed into reclining nudes, and spotted cows melted into their dappled surroundings like chameleons. In some ways, Golden was both the Andrew Wyeth and the René Magritte of the American South.”

In August 2005, Hurricane Katrina made a profound impact upon Golden and millions of others who called the Gulf South home. Despondent in the weeks following the natural and manmade disaster, he wrote in his 2014 autobiography that he contemplated retiring. Instead the artist would find inspiration amid the heartbreak and devastation to produce a series that is now included in the collections of both NOMA and The Historic New Orleans Collection.

The resulting paintings of flood-ravaged streetscapes, stranded refugees on rooftops or wading through toxic water, and a resilient homecoming second-line parade comprised Days of Terror, Months of Anguish, which was exhibited at NOMA from November 2007 to February 2008. Sydney and Walda Besthoff provided funds for the museum’s acquisition of the works.

In the accompanying catalog, authored by John Kemp, former NOMA Director John Bullard wrote in the preface, “While primarily a landscape painter, in his Katrina pictures Golden has proven himself to be an extraordinary painter of the human figure, capturing the despair and agony of people whose lives were shattered … They memorialize the valiant struggles of New Orleanians to survive this tragedy, and his paintings give hope for the resurrection and full recovery of one of the most unique cities in our nation.”