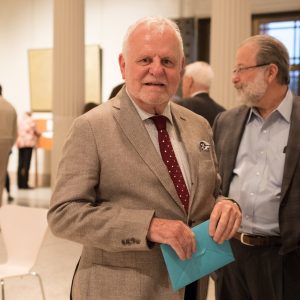 “Bill always made docent training sessions so fun and entertaining. I think our NOMA docents purposefully tried to get him to laugh so that they could hear that burst of joy! Bill would regale us with stories about the objects, the cultures that created them, and their use within that society. And he always had a great memory of collecting as well. It was incredible to hear the long perspective on building a collection.”

“Bill Fagaly had such a profound influence on me, both personally and professionally, that it’s difficult to know where to begin. I was lucky enough to begin working at NOMA before he fully retired and therefore had the wonderful opportunity to learn from him on a daily basis. I was constantly peppering him with questions about NOMA’s history, or sharing ‘discoveries’ I would make in the collection, which were not only often old news to him, but he could frequently tell me the unrecorded history of how it got there. He was always eager to share those stories, which became for me a huge source of pride in my institution. Even after his retirement, Bill and I remained close, meeting a couple times a month to try one of the many new restaurants that constantly pop up in the city. It was a testament to his love for both food and people, and his gracious charm that he was often soon on a first name basis with the chefs. Bill opened my eyes to the possibilities at NOMA and in New Orleans, as he did for so many others. It would be hard to overstate his importance in building the artistic community here. His wide range of achievements in African art, self-taught art, photography, and contemporary art are almost unimaginable in today’s much more specialized world, and yet, were he only starting out now, I have no doubt that he would achieve it all today. He was just that dedicated, intellectually curious, and humanistic. He knew that art was the product of people, and he cared equally about both. Bill was thoughtful, cheerful, supportive, curious, fair, open and caring. The last time I talked to him, a mere six days before his passing, he was calling to warn me and my children about a tornado warning in our neighborhood. An 83 year-old man was calling to make sure we were ok. As the sky got dark, and we crouched under the stairs, I thought about how lucky I was to have him in my life. He was, and will remain, an inspiration.”

“When I received the news of Bill’s transition, I was with my best friends in Chicago. Based on my jarring reaction they immediately asked what happened and I tried to think of the most clear and succinct way to adequately explain the magnitude of this loss. I mentioned how he was someone who helped me get to where I am now through his wisdom and affirmations to others about my talents. I also referenced that he was one of the most important people in New Orleans visual art history. His 50 year dedication to NOMA had such an immense impact on the institution, and I’m certain the effects of his work will continue to reverberate through it in perpetuity. His impact on the visual arts community outside of NOMA was just as major through efforts such as the founding of Prospect New Orleans. In a moment like this, there is a part of me that is greatly saddened by the abruptness of this news and the fact that I didn’t get to share more with him before his passing. But when I think about the moments we were able to share, I’m overcome with abundant joy.

I met Bill for the first time in November 2017 at the opening of Dan Cameron’s exhibition San Título (Untitled) at Jonathan Ferrara Gallery. I had spent that August performing daily in the gallery as a part of a collaborative piece with artist Ti-Rock Moore and the night of Dan’s opening, Ti made sure to introduce me to him. From that point, Dan and I talked extensively—partly about the exhibition, but mostly learning about each other and our respect practices. After probably 15-20 minutes of talking, he said that he wanted to introduce me to his mentor, Bill Fagaly. Dan, Bill and I talked for another 20 minutes or so and both eventually very graciously offered their contact information to continue talking and mentoring in the future. Bill specifically offered to host me at his house to see his collection.

The following week I followed up and met him at his home in the French Quarter. As all who had the opportunity to visit his home, I was greatly struck by the abundance of artistic beauty and culture throughout the entire house. There was inspiration, art and culture at every turn, every inch, every nook and cranny. The aesthetic reminded me instantly of my grandfather’s house or the home of late New Orleans legend and activist Lolis Elie who was one of my grandfather’s best friends, and who I also received great influence from. Bill and I talked for hours about everything from his collection, to my current and upcoming projects, to the issues of New Orleans’ art and culture communities. At one point toward the end of our discussion, he asked if I was planning to attend Prospect’s gala – to which I said no as I did not have a ticket. Without divulging that I was also unable to afford a ticket at that time, he immediately responded by offering an extra ticket that he had available at his table. He mentioned that the table would be “pretty dynamic” and would include local artists and curators such as Russell Lord and Dawn DeDeaux, along with Prospect.4 artist Hank Willis Thomas and his wife Rujecko Hockley. As I write this, I’m still struck by how magnanimous of an offer and immense of an experience that was for me. I will never forget that experience and the deep gratitude I have to Bill for giving that to me.

I continued to talk to Bill every several months, often asking for advice as I began roles with NOMA, Antenna and Prospect. His wisdom often helped me make decisions that have undoubtedly contributed to the artist and curator that I am today, and I’m eternally grateful for that guidance. When I think about his work in conjunction with my conversations with him, the main word that comes to mind is ‘dedication.’ Bill was so deeply dedicated to this city and the art that it has been influenced by, the art it has and continues to create, and the art that it will create after we’re all also no longer on this planet. I remember there were moments in our discussions where I’d share fears I used to have about needing to ultimately ‘leave New Orleans’ [again] to grow more as an artist and curator. I will never forget his feelings against that notion and his slight critique of those who ‘left’ the city. I believe that our deep passion for art, and particular the art of this city, is what created and enhanced our bond throughout our time knowing each other. As I continue on my journey, I will continue to hold his wisdom and guidance close to my head and heart while making sure that I continue his legacy of passionate and unwavering dedication to the United States’ most African city.”