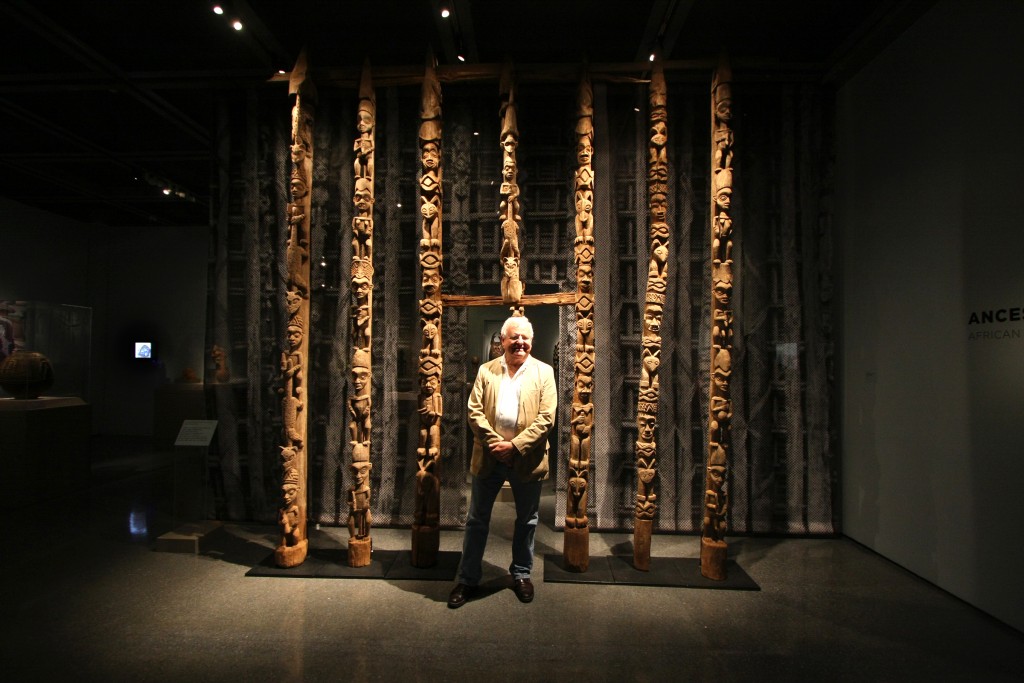 Bill Fagaly at the opening of Ancestors of Congo Square at the New Orleans Museum of Art, June 2011

William A. Fagaly arrived at the Delgado Museum (now NOMA)  to fill the position of registrar in August of 1966. According to Prescott N. Dunbar, museum historian and author of The New Orleans Museum of Art: The First Seventy-Five Years, “that proved to be [Director James Byrnes’s] most important and lasting addition to the Museum’s staff.”

Fagaly’s success is apparent in NOMA’s galleries of African art, and in the international regard for the collection he helped to build. It is difficult to measure the extroardinary impact Fagaly’s tenure had on the New Orleans Museum of Art, the city of New Orleans, and the field at large in his 50 years at the museum. While at NOMA, he served in many roles, from curator of collections, to chief curator, to acting director and curator of collections, and most significantly, Françoise Billion Richardson Curator of African Art. In each role, Fagaly elevated the museum’s offerings in countless ways. As he recounted, “All the while I was involved in Fabergé eggs, a NASA moon rock, Salvador Dali, a Mardi Gras Indian chief, the biennial/triennial series and other projects outside my training and expertise, I was also focused on my primary mission for being there: African art.” [1]

Fagaly curated more than 90 exhibitions in his years at the museum. His most significant was Ancestors of Congo Square: African Art in the New Orleans Museum of Art, the culmination of his life’s work in building NOMA’s collection of African art.

At its inception, Ancestors of Congo Square was intended to serve as a comprehensive catalog of NOMA’s extensive collection of African art. The resulting publication featured the expertise of nearly 50 of the most well-known and respected art historians, anthropologists, and ethnographers working in North America, Africa, and Europe.

In 2011, the project’s scope expanded dramatically. As Fagaly wrote in his recently published memoirs The Night Crawler King: Memoirs of an Art Museum Curator:

When Susan Taylor came on board in 2011 as NOMA’s next director, I was in the midst of writing and editing a large comprehensive volume: Ancestors of Congo Square: African Art in the New Orleans Museum of Art… Susan’s reaction was immediate: this book deserved to have an exhibition. Therefore, the first exhibition of her incumbency in the main galleries was the pieces featured in this new book.

Taylor recalled that  it was “… only fitting that such a project should give rise to its own exhibition, both in appreciation of the authors who contributed to the book, and as a means of continuing to advance scholarship of the sub-Saharan African tribal arts.”[2]

In addition to showcasing NOMA’s collection, Ancestors of Congo Square was a scholarly exploration of the origins and influence of African and African American culture on the city of New Orleans. In his introduction to the catalogue, Fagaly said:

New Orleans is often referred to as “America’s most African city,” and embraced as part of the Caribbean world. The city’s origins are in part European and predominantly French and Spanish, with a later influx of Italy and Ireland, but a major element of New Orleans’ culture stems from its associations with sub-Saharan African and the Caribbean. Famed Congo Square, from which this book derives its title, is an integral part of the city’s chronicle.

“Bill’s idea for Ancestors of Congo Square was to reiterate the known histories of the African experience in New Orleans,” said Ndubuisi Ezeluomba, Fagaly’s successor as the Françoise Billion Richardson Curator for African Art at NOMA. “The way he was able to rally scholars in the field to collect information for his book was remarkable. That, in of itself, was an outstanding achievement in the field of African studies. Such a feat would be difficult to accomplish today.”

“I am proud of my accomplishments in regard to the mission I initially set out to achieve when I first came to New Orleans in 1966 to join the Delgado Museum,” said Fagaly. “That mission was to build an outstanding African art collection in an art museum in a city whose majority population was African American.”[3]