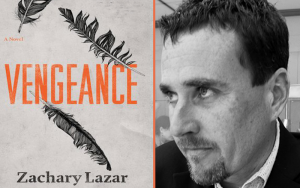 NOMA’s Arts & Letters series welcomes authors, poets, journalists, playwrights, and literary scholars to the museum for public conversations that reflect on literature at the intersection of arts and culture. In partnership with One Book One New Orleans, on Wednesday, April 24, from 5 – 7 pm, novelist Zachary Lazar, photographer Deborah Luster, and actor Bobby Wallace will join moderator Garnette Cadogan for a discussion about Vengeance, Lazar’s acclaimed novel that addresses themes of incarceration, redemption, and healing from both violent crime and injustice. Admission is free.

Lazar and Luster have both dealt with the grief of having a parent murdered. Luster has spent much of her career as a photographer documenting the emotional fallout of crime, including a portrait series of inmates at the Louisiana State Penitentiaries at Angola (male population) and St. Gabriel (female population). The writer and photographer journeyed to Angola in 2013 where both were witness to the rehearsals and production of The Life of Jesus Christ, a passion play staged by inmates. Bobby Wallace portrayed Jesus in the play and will share his experiences. Accompanying music will be performed by Mario Abney.

Lazar spoke with NOMA Magazine in advance of the panel discussion.

Vengeance opens with the Passion Play staged at Angola State Penitentiary. How did you encounter this production and what impression did it leave upon you?

I met Deborah Luster, the photographer, who was already documenting the play at Angola—we are friends now but did not know each other well when I started this project.  Deborah and I have similar themes in our work as well as a very unlikely personal connection that I write about in Vengeance which has to do with both of us being survivors of violent crime. When Deborah told me about the Passion Play project, I was immediately eager to go with her, as the Biblical story has obvious thematic ties to all of my work.  I thought we would be going for a day or two.  The day before we left, an assistant warden, Cathy Fontenot, who has since become a friend, told us we could stay the whole week.  Deborah took photographs and I interviewed more than forty incarcerated people over the course of the week as the actors rehearsed and then eventually performed in front of an audience. This became a long essay, but I still had much more to say about what I saw and heard, so I wrote this novel.

As you mention, you have experienced a horrific crime in your own family. How did this shape your writing?

After many years of not wanting to face it, I realized that the crime—my father’s murder when I was six years old—was at the root of my writing whether I liked it or not.  It wasn’t a choice, but it has given me a subject—violence—that spreads out into many other big themes, including good and evil, and also politics and history. I probably would have been a writer anyway, but I probably would’ve been a writer with less to say.

Vengeance has been chosen as the 2019 selection for One Book | One New Orleans. What do you want readers to take away from the novel?

I think the book is at least in part a love letter to New Orleans. Loving a city is different from liking a city or falling in love with one. Loving a city means you have to reckon with its flaws and its tragedies as well as its celebrations.  I want readers to see their city in this novel. Prison is a part of this city, even though Angola is almost three hours away. Maybe the most gratifying responses I’ve had have been from people incarcerated at Angola who have read this book and given it their approval.

View a selection of Deborah Luster’s Passion Play portraits, including Bobby Wallace costumed for his role as Jesus, at the photographer’s website.

ABOUT ONE BOOK ONE NEW ORLEANS

A campaign for literacy and community, One Book One New Orleans calls on New Orleans residents to share the experience of reading the same book at the same time, works to provide literacy resources to adults, and emphasizes the importance of dialogue between diverse groups of people. The organization’s selection for 2019 is Vengeance by Zachary Lazar.