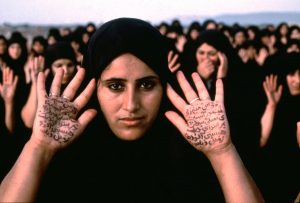 Shirin Neshat is among the eleven artists featured in Bodies of Knowledge, NOMA’s major summerlong exhibition that examines language as a means of asserting and archiving cultural identity. Born in Iran in 1957, Neshat migrated to the United States at age 17.  The Iranian Revolution of 1979 prevented her from returning to her homeland for nearly 20 years, and when she did, she encountered a nation she no longer recognized — secular Persian culture had given way to theocratic Islamic rule. She resolved to create art that addressed this shift, and particularly the implications for women. Her provocative works offended the caliphate, and she is now banned from visiting Iran.

Neshat’s work in photography and film largely addresses stereotypes of Islamic femininity. She symbolically places Farsi calligraphy on hands and faces as a means of expression for women forced into submissive silence. Three of her short videos will be shown continuously on loop in Stern Auditorium every Wednesday from July 3 to October 9 from 10 am to 1 pm (excluding July 17 and July 31). Turbulent (1998 | Winner of the Golden Lion award at the Venice Biennale), Rapture (1999), and Fervor (2000) feature contrasts found in modern Iran and the stark division between the segregated public realms of men and women.

Two of Neshat’s feature-length films will be screened in August during Friday Nights at NOMA: Looking for Oum Kulthum on August 2 at 6:30 pm, and Women Without Men on August 16 at 6:30 pm.

Bodies of Knowledge features a still photograph taken from your 1999 video, Rapture. In the photograph, a group of women expose the palms of their hands, inscribed with Farsi calligraphy. What is the significance of this text?

The inscription of the text over specific parts of the female body are very significant to me. In Islamic culture, the majority of the body is covered with the veil. In my photographic work and in the video, I really focus on the parts of the body that are allowed to be revealed, like the face, the hands, the feet. They are able to say a lot by simply presenting the palm of their hands. These hands raised are kind of a symbol of protest.

Viewers may not be able to read that text, which could lead to mistranslation or misinterpretation. How does that complicate your work?

Well, that’s an issue that I’ve had all along, because all of my photographs have calligraphy. I use music and singing in my videos, which is really significant in terms of expression for the protagonist. In the photographs, the calligraphy takes place of the music or the song. So for me, it’s this idea on the very conceptual level, that these women are not silent. They have a voice.

Now, what they are saying, it will be important to know. But whether you know it or not, you know that although they’re living in a very repressive environment, they’re very vocal and they’re not victims.

Of course, those words mean a lot. They’re not sacred texts, they are poetic texts. Those words that you see, for example, in Rapture, are poetry by Forough Farrokhzad [Iranian, 1934–1967], who is a poet that I’ve repeatedly used in all of my work. She was known to be most rebellious and always broke cultural and social taboos. She felt quite repressed both by the Iranian community, the weight of the tradition, but also the state.

In other works, you focus on individual bodies, sometimes even your own body. Rapture juxtaposes large, anonymous groups of men and women. Why did you employ a crowd of bodies in this work?

That was really the main concept of Rapture that distinguishes it from any other work that I’ve done. For me, Rapture was really to focus on a higher social, political, religious agenda. This narrative was not about pursuing a journey of a single person, but more of an entire society.

You produced Rapture in 1999, twenty years ago. How has your work evolved since then?

I moved from still photography to video, like Rapture, to cinema, like Women Without Men. But then I went back to doing still photography with writing on it, back to video, and now continuing with film. My work has seen an evolution and a kind of a restlessness—not being really faithful a single art form, but giving me the liberty of experimenting, which I enjoy very much.

I am making new work for an exhibition at the Broad Museum that I feel falls very much on the category of my earlier videos, like Rapture, Turbulence, and Fervor, in that they’ll be black and white, they’re be very lyrical, they will be short.

Throughout your career, you’ve confronted what it means to be an outsider, as an Iranian artist living in the United States. What is your relationship to Iran now?

Well, it’s been many, many years since I have lived in this country and I have also had political issues with [Iran]. Unfortunately, it’s not just me. Sadly, millions of people have that problem with this current regime. It’s very unfortunate and unfair how people are divided from home for no logical reason.

I feel like that the biggest shifts in my career and my artistic practice is when I decided that I’d reached an end in making work that is directly related to the Iranian culture. What remains constant, what remains Iranian, is myself.

That has been the defining transformation in my work, I think—just accepting the fact that I may never go back to Iran and that’s okay. Therefore, my work has to stop just looking at my memory… I just won’t make work like that anymore.