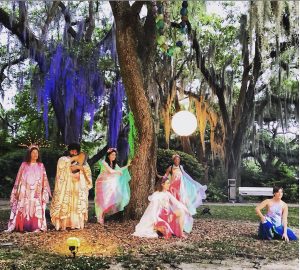 Moss-draped live oaks in the Besthoff Sculpture Garden add to the magical setting of The Henchman.

Three productions remain for the NOLA Project’s popular play The Henchman, staged in the Besthoff Sculpture Garden on May 29, 30, and 31 at 7 pm. (Tickets are still available.) Playwright Michael Aaron Santos spoke with NOMA Magazine about the challenges and joy of writing a play specifically for this location, and one that was written in seventeenth-century English in a poetic style.

Writing The Henchman was no small feat. It takes some audacity to write a play in Shakespearean English in iambic pentameter. What led you to pursue such an ambitious writing project?

There are a lot of playwrights that would probably feel intimidated by that, but I found very pleasing. In 2015 I had written a contemporary play, contemporary dialogue, but it was a play within the play about writing a prequel to Shakespeare’s The Tempest. So I kind of wrote myself into this little box. It was the last part of the play I was going to tackle, and I was really worried about it and didn’t know if I could do it. But, I wrote it and I just developed a comfort with sort of expressing character’s thoughts and not being limited by the language.

From there, I continued this idea of sort of taking some plot holes, or just unanswered questions in Shakespeare’s plays and providing some answers. So, I had sort of conceptualized what I was going to do with The Henchman before AJ even asked me to write a play for the NOLA Project set in the sculpture garden. He knew that I had written a couple of children’s plays based an Aesop’s fables by expanding the fable and creating a new story with characters. So he said, “You can do one of those.” I said, “Well, I could do that, or how about an iambic pentameter verse sequel to A Midsummer Night’s Dream.” And he said, “Sure.”

A little hint of doubt there, huh?

Yeah. Luckily, he gave me about a two year window. I’m not in a place where I can sit and write every day. I have other duties. I would love to just sit in an office and write for eight hours a day. I think I’d crank out a lot of plays that way. But, took me about nine months to get the first draft to him. But, I had sort of known the story I wanted to tell before

But, the changeling boy in A Midsummer Night’s Dream. I mean, that is such an obscure figure. Why did you germinate on that one?

Well, it’s always been a source of confusion for me. There are many questions in Shakespeare’s plays that go unanswered, like why do the Montagues and Capulets hate each other so much? And, truth be told, I’m currently writing the reason why that happened right now. In The Tempest the question I was trying to answer is where did Prospero get all these clothes from? Because he’s described as being sent away with just the most meager amount of materials, and lands on an island. But, when Trinculo and Stephano appear, they happen on this huge wardrobe. Anyway, back to The Henchman. The changeling was always one of those mysteries for me. Because he’s not really representative of a true changeling if Titania has his mother in her order. Because, with the changeling, it’s sort of like a swap, and the parents are left with a colic child. That was one reason they sort of explained a fussy baby is that the elves had switched.

So, he didn’t feel like a true changeling child. Why did Oberon want him so badly? It was causing all this mayhem in Midsummer. And, it was such an important element of the story, because Oberon and Titania aren’t getting along. It sets Puck off to do all these things and it messes with the lover’s plot, and of course it turns Nick Bottom into a donkey, and it effects all the other characters from this little plot point that we don’t get a whole lot of information about.

Of course, at the end, I think a problem in the 2019 lens is that Oberon wins. He makes fun of Titania and tricks her, and eventually gets the boy. So, I wanted to give a real stakeholder reason why it was so important for Oberon, that he had promised the boy’s father. And, there were real stakes behind what would happen to him. And, that’s also why Theseus and Hippolyta are in the play because I want it to link them to that promise as well. That it was these kings getting together and saying, “I have a problem. I need your help.”

You have obviously become a true scholar of Shakespeare. What sparked that interest?

I think I’ve always been just a lover of history and want to know more, not just about the plays, but the playwrights, and what they were influenced by when they were coming of age. And, even as an actor, I kind of want to know what went on that produced this very visceral thing. I’ve been privileged to be the main teacher of theater history at Delgado Community College. And so, just, it’s been a natural sort of as I become more, or continue to be a lifelong learner, and to impart things to my students. And, they’ve pointed out things that I would’ve never have thought of: Why does this happen?

Writing a play in Shakespearean English and iambic pentameter strikes me as very challenging. Did it come easy?

It is time consuming for sure. Because, often in a scene, I will sometimes at least write out the scene in the most horrid way. So, I don’t love any of those words, but it’s like robot language. Like, “Come over here,” or “No, I don’t want to.” You must have a character’s wants and motivations first. And then, you do a lot of counting on your fingers for syllables. I need a good thesaurus: What’s a good word for look?

In The Henchman there are also a lot of homages to Shakespeare. As a playwright he gets quoted a lot in popular culture, and especially lines from Midsummer. I’ll pull quotes directly from the play on purpose, but even from some other plays as well. And, of course, he has a lot of conventions that he uses. Characters will start a phrase with, with faith, or peace, or merry. So, you can kind of cheat a little bit and capture those things and use the thou’s, if you get comfortable with changing verb noun order.

I don’t mind stealing from Shakespeare because he pretty much stole most of his material. I think we don’t have source material for The Tempest and maybe Love’s Labor’s Lost. I think there’s a couple of plays where they’re like, I don’t know where he got this from. But, every other play has either a literary source, or just a mythology, or a history level to it.

What role does the Besthoff Sculpture Garden serve in the play?

It is magical. Before I was a member of the NOLA Project, I attended the company’s 2011 production of A Midsummer Night’s Dream, and it was an eye opening experience for me because I had never really thought about this immersive setting and the idea of the play and the audience moving from place to place. There is nothing like the intimacy that the garden lends to theater because the playing spaces are intimate. That production has always stayed in my mind, and I’m sure it was just a watershed moment I think for the NOLA Project. The garden was certainly there in my mind in my conception of what’s possible in The Henchman, especially the intermission where the characters are seen sailing in the lagoons as the audience moves from the back of the garden to the front.

The Henchman is made possible by a grant from the New Orleans Theatre Association. Read more about the play in this review from Gambit.

All seating for The Henchman is bring-your-own. Food trucks will be available at all performances as well as a fully stocked bar. No outside food or drink is allowed inside the Sculpture Garden other than food truck and NOMA bar items. This production will be staged in two locations; Act I will occur in the oak grove in the back of the current garden and Act II will move to the front pine grove during the intermission.

Rain Plan: For productions canceled due to inclement weather, we will notify all ticketed patrons no later than 4pm. Patrons will then receive instructions via email on how they may reschedule their tickets for another performance or request a refund. All ticket purchases for any production that is rained-out mid performance are final.