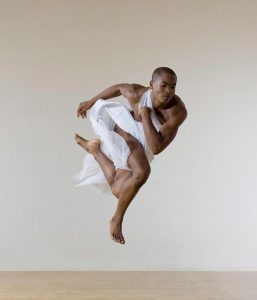 New Orleans native Edward Spots is an internationally renowned dancer, choreographer, and actor. On Friday, June 28, he will lead a group of youth dancers in a site-specific work of dance at NOMA titled Black Magic that will mark the opening of the exhibition Bodies of Knowledge. The performance will begin on the front steps of the museum at 5 pm. After the first act, the audience will follow the dancers into the Great Hall to watch the remainder of the show.

Black Magic unfolds in five distinct dance movements: Black Suffering, Black Anger, Black Beauty, Black Love, and Black Joy. This work will explore varying aspects of black cultural identity through dance and the body. This original work will depict joy as a form of resistance to dominant depictions of the black experience, and consider what is often forgotten and omitted from prevalent representations of black life. Spots serves as artistic director and New Orleanian Donna Crump is the choreographer. They will be joined by twelve youth dancers from Dancing Grounds, a New Orleans-based nonprofit organization that builds community through dance with programs that work at the intersection of arts, education, and social justice.

Spots spoke with Gabrielle Wyrick, NOMA’s Director of Learning and Engagement, in advance of the performance.

How were you first introduced to dance?

I was in middle school here in New Orleans and took Brazilian martial arts as an elective. I was moving, but I wasn’t dancing. I remember there was a girl I liked, and she told me that her dance teacher needed young men to lift the girls for a dance piece. And I was like, Oh sure, I’m doing it. I remember the first class and goofing around, not taking it very seriously. But then I remember getting ready to perform and I slowly started to love it. I slowly started to like moving.

Where was the first place you took ballet?

It was the New Orleans Dance Academy. I remember walking into the class and it was me and all white girls. There was an older girl who approached me and said, “Come on, you get the bar.” Even though I felt so totally out of place, I felt like I was in the right place. After that, dance became my whole life.

How did the idea for the Black Magic dance performance come about?

I was in Utah at Sundance with Garrett Bradley, and she mentioned to me that doing a dance piece could be a possibility for the Bodies of Knowledge exhibition. And then, after my first meeting with the museum staff, I realized this was a real and authentic opportunity. From there, I really wanted to work with young dancers of color and incorporate them into this piece, and use it as a means to broaden their dance experience and performance opportunities—that’s where the partnership with the Dancing Grounds youth came in. Personally, most of my performance work is very classical, even in the contemporary world it is still very classical. So it’s exciting to me to have the opportunity to do a project called Black Magic. As an artistic director and performer of this performance I get to reflect the times and state something that I feel is needed — I rarely get to do that. Even though I’ve performed all over the world, this will be the first time I’ll be performing something that’s very dear and intensely personal to me.

How does your performance relate to some of the major themes in the exhibition?

When I was approached about doing this work, I immediately thought this is a story I want to tell with such a rare opportunity. I want it to be a work that reflects my life as a black man and how I view it. Right now, we’re in such a divisive political world. I don’t want to give too much away, but the performance starts with Robert F. Kennedy’s speech after Martin Luther King’s assassination. I wanted to start with that because MLK inspires me politically and I deeply admire the way he went about striving for civil rights. It was always about love. It was always about momentum. It was all about coming together.

Spots began his dance training with Baderinwa Rolland “Mama” at the very first New Orleans Charter Middle School. He has trained extensively, from NOCCA and New Orleans NORD Centers as a young dancer, to the Walnut Hill School for the Fine Arts, The Joffrey Ballet School in New York, and the Washington School for Ballet in the District of Columbia. In 2010 he entered the Ailey School as a student, ultimately becoming part of the Ailey II Company where he performed and taught domestically and internationally in more than eight countries. He has danced with Urban Ballet Theatre, New Orleans Ballet Theatre, Civic Scranton Ballet, Delaware Dance Company, and Marigny Opera Ballet, and has been featured in numerous commercials and television shows.