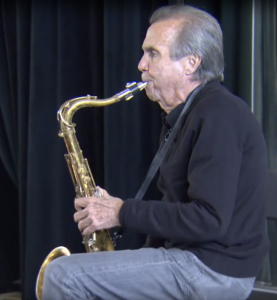 On Thursday, May 2, from 6 to 8 pm, NOMA will host Louisiana native Dickie Landry for one of his renowned solo concerts with saxophone. Defining Landry as a musician is too limiting, given his range of talents. Born in Cecilia, Louisiana in 1938 began his musical training at the age of six when he joined the St. Joseph Catholic Church choir singing Gregorian chants for six years seven days a week.  Landry picked up the saxophone at age 10 and continued the journey that would take him places far removed from the small town in St. Martin Parish where he was raised.

After attending what is presently known as the University of Louisiana at Lafayette where he majored in music education, Landry taught for two years in the rural community of Chataignier in St. Landry parish.  Restless and tired of playing in a soul band, The Swing Kings, in 1969 Landry moved to New York City to broaden his musical horizons and hopefully find some work.

The avant-garde art scene in New York City was about to explode after a period of Abstract Expressionism and Pop Art. Landry soon fell in with a crowd of artists, musicians, dancers and theater people that included Keith Sonnier, Robert Rauschenberg, Gordon Matta-Clark, Robert Smithson, Michael Heizer, Walter de Maria, Steve Reich, Philip Glass, Laurie Anderson, Susan Rothenberg, Nancy Graves, Spalding Grey, Joan Jonas, Richard Serra, Mabou Mines, Chuck Close, Robert Wilson, Lawrence Weiner, Joseph Kosuth, Bruce Nauman, Trisha Brown, Deborah Hay, Mary Heilman and others who are now considered visionaries in their respective fields. It was at this time that Landry took up photography, not as an art form but simply to supplement his income. When not playing music, he would be hired by his newfound artist friends to help with their performances, installations and exhibits. He would ask if he could take pictures, not thinking of documenting anything — it was just a way to make extra money.

Landry spoke with NOMA Magazine in advance of his concert and touched upon the course of his life and the many influences that have shaped his art and music.

How did you get introduced to playing the saxophone and what shaped your musical style?

My brother John left me his saxophone when he joined the Air Force during the Korean War. He is eight years older than me. I thought at the time, if he can do it I can also learn how to play it. He then started sending me jazz records, basically West Coast jazz that served as an inspiration.

I also have to say that singing Gregorian Chant (in Latin) in the Catholic Church seven days a week at the age of six till thirteen had a huge impact on my musical journey.

Likewise, how did you begin working with photography?

I met a young performance artist, Joan Jonas, one day in 1969 on the streets of New York. I was introduced to her by Philip Glass and Richard Serra. At that time I was working as a plumber with Philip, who would go on to become one of the most influential musicians of the late twentieth century. Joan invited me to her first performance the next evening. I borrowed a friends camera, but I had no idea how it worked. He loaded it and set the ASA and speed and off I went. The following morning after the performance, Joan called and said, “I saw you there with your camera, do you want to sell me some of the images.” It thought to myself, plumbing or photography? I then started working with many artists soon after this. I fell in with a crowd of artists, musicians, dancers and theater people who are now considered visionaries in their respective fields.

Before all of this, my involvement with 35mm film begin in high school when I became the projectionist in the local movie theater in Cecilia. Handling the film and observing lighting and composition helped me with my photos till today.

How did you meet Keith Sonnier?

I first met Keith thru our art teacher, Calvin Harlan, at the University of Southwestern Louisiana in Lafayette. Calvin was a huge influence on me with his knowledge of the American contemporary music world. This was I think 1964 or sooner. I moved to NYC in Jan. 1969 and beginning working with Keith helping
him build his sculptures and then working with him as a videographer and soon after as his photographer. I worked with him for appoximately five years, and we are still the best of friends!

I understand you also run a pecan farm near Lafayette now — solo?

The farm keeps me grounded. And yes, I work there solo.

In his 60-minute performance in NOMA’s Great Hall, Landry will play the tenor saxophone to explore the textures and abstract layers of sound within NOMA’s iconic architecture. There will be no seating, and the audience is encouraged to move around freely throughout all levels of the museum during the performance.

WATCH A VIDEO ABOUT DICKIE LANDRY