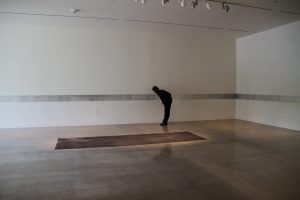 Adriana Corral is among the eleven artists whose works are included in Bodies of Knowledge, an exhibition that reflects on the role language plays in archiving and asserting cultural identities. Her work draws attention to the widespread disappearances and murders of women and girls in Juarez, Chihuahua, Mexico.

Through her site-specific installation, Memento, Corral transfers these women’s names onto a gallery wall. Honoring the women killed in these acts of violence, Corral reduces to ashes the transferred name documents, creating an ash burial plot sifted onto the museum floor. Working with a human rights attorney, Corral conducted research into the Campo Algonero v. Mexico case, and gained access to classified documents and archives that she was able to read, but could not reproduce or publish. In a process that acquires the spiritual and emotional weight of a ritual act, she burns copies of these documents and uses the resulting ash to transfer the names of missing women directly onto the gallery wall. Given the instability and fragility of her material, the names become illegible, yet the process of inscribing them honors the lost histories of these unknown victims. Memento memorializes the victims of human-rights violations while also speaking to the politics of silence, disappearance, and absence that mark contemporary geopolitics along a contentious border.

Corral spoke with NOMA intern Amy Crum about this poignant installation and the message of Memento.

Can you describe the process of conceiving and creating your work?

Some of the main elements of my work are text, the act of erasure, and the materials of soil and ash. My work is made up of various layers, from the nuances of complex political issues to ignored or buried histories.

My practice is research-based, and at times, I collaborate with journalists, families of victims of violence, artists, scholars, historians, and human rights attorneys. These collaborations contribute a vital layer to my pratice, allowing me to bridge relationships across many different disciplines, communities, demographics and ages.

For each of my projects, I carefully plan the different phases of research and development in advance, but also allow myself to be intuitively guided as the process unfolds. My studio feels like a greenhouse, where I always have multiple ideas cultivating. Many of my projects are years in development. I am constantly nurturing each “seedling” or work in such a way that they often end up building off of and informing one another.

Memento, as the title suggests, functions in part as a memorial.  Was this your intention?

The etymology of words is a crucial part of my pratice, which I consider holistically across all of my art. A mementois a poignant reminder of a person or event, which in the Latin verb form means to remember.

Works like Memento are like memorials or monuments in that they commemorate the names of murdered victims. However, most of my text pieces are ephemeral and site-specific. Unlike a typical memorial, after each installation the walls I place the names upon are painted over.

For me, the ephemeral nature of works like Memento parallels the murders they document, in that each time these women’s stories are told in the news or courts they have a moment of validity and potency, but then disappear or fade out, creating a cycle that repeats itself over and over. Yet, in some way, I believe each of these acts of naming leaves a trace behind.

Despite the fact that many of my works are ephemeral, it is my intention to always keep a record of my own work in a way that runs counter to the hidden nature of the histories I expose and question, which is why I always archive and preserve part of the installation. Then, the work takes on another form of existence, as part of an archive. The installation, Campo Algodón, Cuidad Juarez, 21 de Febrero del 2007 was the catalyst for my practice of documenting my process and then archiving the residual matter. This particular installation gave me the opportunity to consider what traces such events leave behind, what we preserve, and why.

There is a lot of unseen time and labor in your work, in that you use a meticulous, time-intensive process to create your installations, which are often themselves based on amassing a large amount of research from a variety of sources. Why do you work in this way?

Process and labor is a vital component of my work. Each of the works that I create goes through a process that is carried out with a considerable amount of time, care, and fragility. Although my work often looks quite minimal visually, it is maximal in content. I often focus on marginalized histories, both past and present, and a big part of that is considering the people who make up our labor force, whose work is often invisible or overshadowed. There are traces of marginalized labor in the spaces we inhabit daily, from the buildings we enter, to the roads we drive on.

Since I began making work like Memento, I often find myself looking around my environment and thinking, who made that? Who was it built by? So many things around us have stories akin to that of a site-specific flag installation that I did at the Rio Vista Farm in Texas, which focused on the Bracero Program, one of the largest foreign worker programs in US History. For this installation, I created a sixty-foot flagpole and white cotton flag, which displays an embroidered bald eagle on one side, and a golden eagle on the other—symbols of the United States and Mexico, respectively.

I worked with an amazing seamstress, Lucy Rodriguez, to create the flag. She has worked on many large projects, but what I found most compelling was learning that she had sewed the inaugural flags for the White House.  It makes me wonder, do the American people know that a a fierce Latina woman is responsible for sewing our American flags? And not only her, but a whole team of Latina women?

Your work is often site-specific, and responds to particular architectures and spaces. How did you arrive at inscribing on walls and working upon existing architecture?

Achieving a balance between the content, the site and the people whose narratives I aim to honor is something I am always working to achieve.

One of my touchstones when creating installations is to refer back to places in my life that have granted me moments of contemplation. At various times when I lived in Europe, it was the duomos in Italy and monuments and memorials throughout Germany and Poland that resonated with me most. Spending time in sacred spaces, I observe how they honor life, and how people move through them and exist within them in ways that are different than their everyday experiences.

The most basic architectural orderings—place, path, pattern and edge—all inform how I draw and create my installations, along with the history and context of the site. In the case of my installation at NOMA, I used the horizon line of a landscape to divide the wall into two, signifying the division between life and death. The names that extend along the wall create a horizontal band that have moments of clarity, and moments of erasure.  In a sense, this structure also mimics one’s last breath and last heartbeat, as seen on a flat line monitor.

You had an opportunity to spend three months in New Orleans this year through a residency at the Joan Mitchell Center. How do you think the themes in Memento relate to New Orleans, and its own histories?

Bringing Memento to New Orleans offers an opportunity to reflect on the city’s own history, and ask questions about its past and current policies. How many women in New Orleans are living in the shadows of labor? How many are undocumented, and thus under threat of exploitation and persecution? How many women are being exploited by employers, often based on immigration status, and working at extremely low wages with no access to healthcare or childcare? How many are subject to violence?

What is next for you in your work?

My latest project highlights the past histories of mistreatment of Mexican immigrants along the US/Mexico border, focusing on the delousing procedures used on Mexican immigrants beginning in 1917. Very little information about twentieth-century delousing procedures. which used an assortment of toxic cyanide-based chemicals—kerosene, Zyklon B, and DDT—are available to the broad public. When seventeen-year-old Carmelita Torres protested the bath and delousing process at the Santa Fe International Bridge linking El Paso and Juarez in 1917, she started what was widely reported as the “Bath Riot.” It began with Carmelita, and then quickly grew to thousands of women joining her in protest. They were described as “bees swarming,” and shut down the bridge temporarily. The women were not only protesting the delousings, as it was also reported that men were photographing them unknowingly during the bathing process and then circulating the images. Many letters were sent to the Surgeon General reporting this activity. Unfortunately, despite these protests, the delousing process did not yield, but went on for another 40 years.

What do you hope NOMA audiences take away from Memento?

It is my intention that the people who come to see the work spend time with it and unpack it in a variety of ways, from its content to its formal display. The installation grants them the opportunity to move through the space, and visualize the density of names that make up the wall drawing, which is interlaced with whispers of legible names. Viewers walk between the names on the wall and the ashes on the floor. May it begin more conversations within New Orleans among those who open themselves to experience it! This is how Memento, and the stories of the women that it documents, will live on.

Now, more than ever, we have a duty as people, not just as artists, to be vigilant, be more observant, ask questions, advocate for each other and push for change. One thing I have learned through my work and research is that change isn’t done alone, it’s accomplished through collective action. I think we must be cognizant about how the injustices of the past have begun taking new forms in contemporary times, from human trafficking to mass incarceration, and work together to make positive change.