Cradled in the palm of a hand or worn close to the heart, portrait miniatures functioned as intimate tokens of love, loyalty, or memorial. These tiny portraits capture remarkable details of lace, jewelry, magnificent hairstyles, royal adornments, and military regalia, all executed by artists who sometimes used a single hair as a brush.

The Latter-Schlesinger Collection of Portrait Miniatures, from the sixteenth through nineteenth centuries, were given to NOMA in 1974 by Shirley Latter Kaufmann in honor of her parents, Harry and Anna Latter.

Portrait miniatures were the passion of New Orleans collectors, English-born Harry Latter and his wife Anna Shushan Latter of Garyville, Louisiana. In 1957, Latter travelled to London to oversee a government project at the request of President Eisenhower. Joined on the trip by their daughter Shirley Latter Kaufmann and her children, Lee and Lisa Schlesinger, the family dedicated the trip to the pursuit of English portrait miniatures. After her parent’s passing, Kaufmann gifted the magnificent collection to NOMA, where she was a trustee for more than twenty years and board president from 1978 to 1979.

This permanent collection installation of more than one hundred portrait miniatures is on view in a new, specially-designed cabinet in the Decorative Arts Galleries. A digital tablet details stories behind these celebrities of their day, the highly-skilled craft of miniature painting, and the Latter family collection. 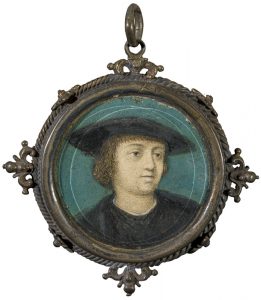 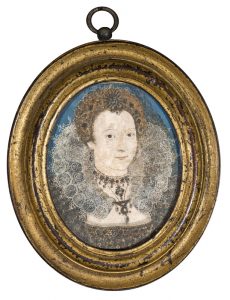 Nicholas Hilliard was the first notable English portrait miniature artist, and is responsible for some of the greatest artworks produced in the British Isles. Hilliard was appointed official portrait painter to Queen Elizabeth I (1533–1603). The politically fraught Elizabethan years saw the Queen’s wealthy subjects wearing miniatures of her image as a sign of loyalty. Hilliard trained as a goldsmith and developed special techniques for painting elaborate court jewels like the magnificent necklaces worn by this Elizabethan Lady. The artist wrote A Treatise Concerning the Arte of Limning (c. 1600) that detailed the preparation of materials and tools in the refined art of portrait miniatures. 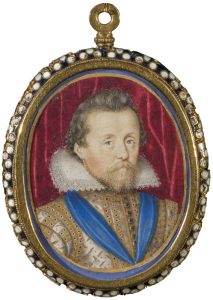 James VI of Scotland (1566–1625) was the only child of Mary, Queen of Scots and a cousin to England’s Elizabeth I, the Virgin Queen. At Elizabeth’s death, the Scottish ruler ascended to the English throne as James I. This smooth transition of power for the first time united England, Scotland, and Ireland as Great Britain in 1603. King James retained Elizabeth’s court painter, Nicholas Hilliard, and commissioned numerous portraits of his wife, Queen Anne of Denmark, and their royal children. James saw the power of image for political and diplomatic purposes, using miniatures as gifts during peace negotiations with Spain in 1604, and as a tool for the strategic marriage of his daughter, Princess Elizabeth (future Queen of Bohemia). 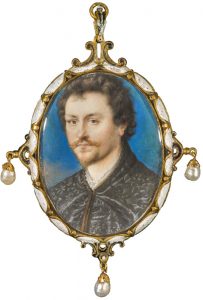 Thomas Wentworth, First Earl of Strafford, was an English statesman and critical advisor to King Charles I (1600–1649). The artist John Hoskins was honored the life-long appointment as painter to Charles I. Wentworth believed in a benevolent and efficient English government ruled by the authority of a king, and as an advisor he was known for ruthless ambition. He advocated for war with Scotland in response to a revolt, and over his career continuously sought to consolidate power on behalf of the King’s sovereignty. For both of these faults, the English Parliament executed Wentworth in 1641. 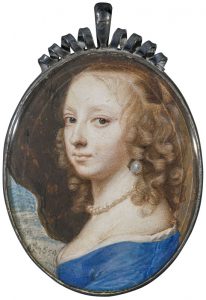 Samuel Cooper is regarded as the top miniatures artist of the seventeenth century. Cooper learned the craft from his uncle, John Hoskins. During the period of the English parliamentary rule, Cooper was employed by Oliver Cromwell, Lord Protector of the Commonwealth of England, Scotland and Ireland from 1653 to 1658. This miniature shows Cromwell’s youngest daughter, Frances, at age 16 years old.

Cooper became the court painter to King Charles II when the English Monarchy was restored (after Cromwell’s death) in 1660. According to a period diary, the new King immediately sat for Cooper to make “a crayoning of the King’s face and head, to make the stamps” for the new coins. 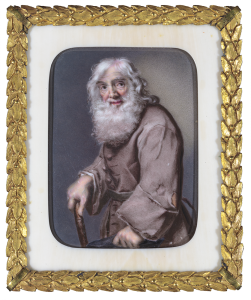 Typically showcasing wealth and beauty, portrait miniatures most often depict affluent and famous individuals. This Irish miniature features an unusual subject, William Thompson, known to the public as the “Beggar of Dublin.”

The artist Rupert Barber was one of the first professional miniaturists working in Ireland. He worked in enamel, a laborious process requiring each color to be fired individually in a hot kiln. The resulting intense enamel colors beautifully capture the personality of the subject in this “cabinet picture,” or a small portrait for wall hanging. Barber’s study drawing for William Thompson is housed in the collection of the National Gallery of Ireland. 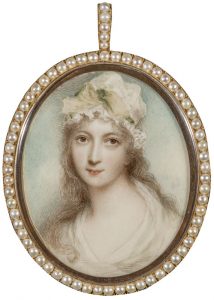 Said to be delicate and lovely, history tells that Henrietta Ponsonby (English, 1761–1821) lived a life of lust, excitement, and personal intrigue. Younger sister to the infamous and enticing Georgiana Cavendish, Duchess of Devonshire, Henrietta’s life similarly included a series of extramarital lovers, excessive gambling, and controversial political involvement. Outlandishly. for high-society women of the time, Henrietta actively participated in politics for the Whig party. In a parliamentary election of 1784, the famous sisters secured the election of Charles James Fox by persuading undecided voters. Period accounts, including from King George III, rumored that the sisters used a “kisses for votes” campaign. 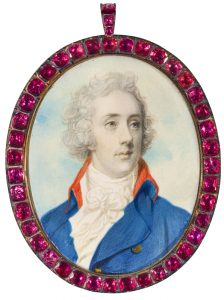 Richard Cosway was the most fashionable miniature painter in England from the 1780s into the early 1800s. Cosway guaranteed his successful career by flattering his subjects, and through his innovative technique of using transparent pigments so the natural luminosity of ivory shines through.

In 1781 the flamboyant Cosway married the English-Italian artist Maria Hadfield, a friend and confidant to Thomas Jefferson. In London, the Cosways were at the center of a dazzling cultural elite, including celebrities like the Prince of Wales (the future King George IV), an arts patron who was painted nearly fifty times by Cosway.

William Pitt the Younger was a prominent British statesman who became the youngest UK Prime Minister in 1783 at the age of 24. 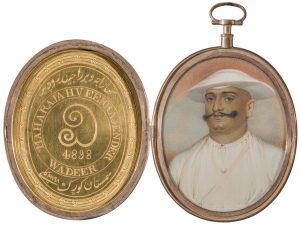 The English miniature artist Ozias Humphry traveled in India from 1785 to 1787, confident that the community of British expatriates and wealthy Indian princes would provide fame and fortune. Humphrey’s venture abroad turned disastrous when many of his clients refused to pay their bills, leading the artist back to England in financial crisis. In 1772 Humphry severely injured his eye during a riding accident, and by the end of the 1790s he was entirely blind. This miniature depicts Dodda Vira Raja, the 1780 to 1809 ruler of Coorg (Kodagu), a rural district in the southwest Indian state of Karnataka.

This installation was made possible with the support of the Milton H. Latter Educational and Charitable Foundation.