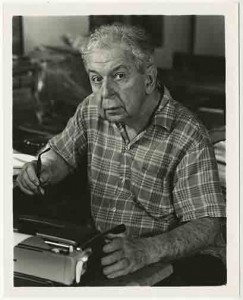 Putting NOMA’s noted photography collection on view is a priority, not only in our own galleries, but also through loans to regional, national and international exhibitions. The Historic New Orleans Collection has been a particularly significant partner in this endeavor.

The Collection borrowed 28 works from NOMA’s holdings for its current exhibition, Clarence John Laughlin  and His Contemporaries: A Picture and a Thousand Words (on view through March 25, 2017). The loan includes images by renowned photographers who traded work with Laughlin, among them such titans as Imogen Cunningham, Wynn Bullock, Berenice Abbott and Edward Weston. The exhibition  details the creative life of Laughlin, a French Quarter denizen who achieved international eminence for his visionary photographs of Louisiana subjects.

The Laughlin show exemplifies the collegial bonds that have long defined relations between the two institutions, said John Lawrence, Director of Museum Programs for THNOC. Lawrence has a memory for such things. In a recent interview, he ticked off the names of every NOMA photo curator going back through his own four-decade tenure at the Collection, and mentioned a host of past loans and collaborations.

The two institutions don’t just collaborate on photography exhibitions. Visitors to another current show at the Collection, Goods of Every Description: Shopping in New Orleans, 1825–1925, will find ceramics loaned by NOMA and a curtain from the museum’s Butler-Greenwood Plantation parlor. When that antebellum parlor was exhibited at NOMA in 2015, the Collection loaned portraits of the plantation’s original owners.

“After Katrina, NOMA and the Collection embarked on a multi-year series of exchanges and exhibitions to showcase where our holdings reinforced each other,” Lawrence said. “It’s been  a comfortable fit for both institutions because we’re quite different – a history museum and a fine art museum — and because it just makes sense for institutions in the same town to find common ground, to seek projects that better both partners.”

Making the Laughlin loans was  an easy decision for Russell Lord, the Freeman Family Curator of Photographs, Prints and Drawings at NOMA.

“The exhibition reunites works from NOMA and the Collection that were all part of Laughlin’s personal collection during his lifetime — so it makes sense to display them together,” Lord said. “We’re thrilled that so many French Quarter visitors will see our photographs in a fresh context — and we hope that some of them will be spurred to visit NOMA,” he said.