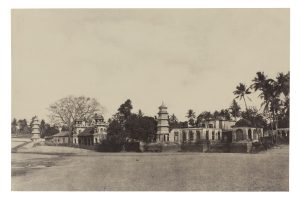 As a captain in the East India Company army, Linnaeus Tripe produced some of the earliest photographs of India and Burma in the 1850s. Many of his photographs were ultimately set into a series of lavish bound albums that comprised a visual survey of these locations. This photograph, which Tripe made in Triviar (Trivady), a town near Tanjore, shows the “ghats” or sacred bathing places and entry points alongside a body of water. Although these photographs are today some of the best documents of the structures that existed at the time, it is important to remember that they were produced in service of a foreign government that sought to control these places and the people that lived there.