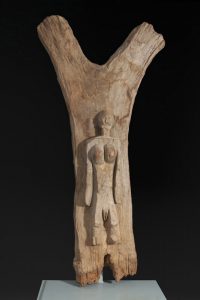 The to guna literally translates to “house of words”—it is a men’s meeting house and considered to be the center of the community. A to guna is often sited in a high place overlooking the village. The roofs of the structures are constructed of layers of millet stalks, which can be over six feet deep and supported by wooden beams. Stones or blocks, which are sometimes plastered with earth and molded in relief or carved wooden posts, in turn support these beams. Their connection with community and the environment makes them very important ingredients of cohesion. The to guna are intentionally built to be very low to the ground as a way to get participating members to sit down when in deliberations. This aligns with the idea that harmony is attained when matters of community are discussed when seated. Sitting also signal mutual respect and free speech.

This to guna post on view in the African gallery at NOMA is one of the most referenced in the literature. It formed a significant part of one the most important structures where affairs of state were deliberated, with a view to finding solution. The Y shape at the top of the post is the groove that holds the connecting wood (beams), which in turn hold the millet stalks together. The high relief carving of a nude female figure serves not only as decoration on the post, but also as a symbol of the presence of women within these shelters. It was believed that female ancestors visit at night to share in the deliberations, therefore these female posts can be said to represent such feminine presence. The female figure is also a complement to the Dogon belief in dualism (male/female dichotomies), gender reciprocity and balance.