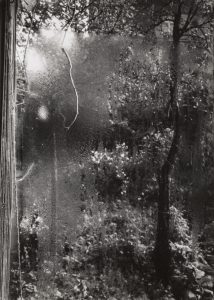 In 1940, Josef Sudek began his best-known series of photographs, a body of images of or through his studio window in Prague, Czechoslovakia. The forty-four year old veteran of World War I, in which an injury to his arm resulted in its amputation, concentrated on this subject for fourteen years, highlighting the variety and range of expression that can be achieved with a slim part of the world that is close at hand. It is no accident that the series coincided with the German occupation of Prague, World War II, and the subsequent Communist regime. For Sudek, who grew increasingly reclusive over the decades, his studio, the window, and the small garden beyond became an important sanctuary, and a way to express his own tentative relationship with the external world. Sometimes perfectly transparent, sometimes coated with frost or water droplets, the glass window both frames the outside world and serves as a barrier from it. In this one, for example, the garden is obscured enough to become abstract (which is perhaps why, in a moment of distraction, Sudek signed NOMA’s print upside-down). Emphasizing the window’s surface is also a nod to the photograph of that window: like its subject, the photograph’s surface is something that we can look at and look through to the world beyond.