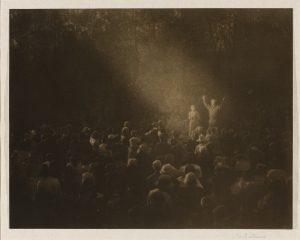 Born and raised in New York City, where he studied under Clarence H. White at his photography school, Karl Struss was an active member of the pictorialist photography community, which favored soft, dark, and carefully crafted prints, like this example. In 1919, Struss moved to Hollywood, where he became one of the leading early cinematographers, winning one of the first Academy Awards for cinematography for his work on F. W. Murnau’s Sunrise (1927). Fortunately for Struss, the fledgling field of cinematography still had a proclivity for the expressionist strain of moving pictures that emerged from Germany. This aesthetic perfectly matched his approach to photography, as this film still for an unidentified project reveals. Isolated by a sharp beam of light, “the faith healer” is presented ambiguously: the loyalty he inspires, attested by the enormous crowd presumably on hand to witness his power, is both troubling and potent. It is likely that Struss made this picture as a kind of film still on the set of the 1921 silent movie The Faith Healer, now lost. Karl Struss, along with his teacher, Clarence White, co-curated the first ever photography exhibition at NOMA in 1918.