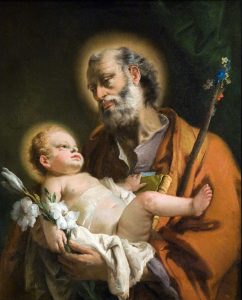 Giovanni Domenico Tiepolo, Saint Joseph and the Christ Child, before 1762. Oil on canvas, 56.63

In the pantheon of Catholic saints, St. Joseph holds a special place of devotion among many New Orleanians. On his feast day of March 19, Sicilian Americans in south Louisiana have long built elaborate food-laden altars of bread, fish, fruits, vegetables, pastas, cookies, and other non-meat Lenten specialties as a carryover tradition from Europe. Churches and private homes are host to these culinary manifestations of gratitude. The date also holds significance for Mardi Gras Indians who consider St. Joseph’s Night a secondary Fat Tuesday, offering an opportunity to show off elaborate beaded-and-feathered suits that are a yearlong labor of love among African American practicioners. Appropriately, NOMA is home to a painting of the earthly father of Jesus, created more than 350 years ago by a Venetian master artist.

Here are five facts about the painting and other information surrounding the story of St. Joseph.

According to the Book of Matthew in the New Testament, Joseph was a fourteenth-generation descendant of the House of David. A humble carpenter, Joseph had yet to consummate his marriage to Mary when she revealed a mysterious pregnancy. Incredulous, Joseph offered to divorce her quietly  knowing that any claim of adultery could result in death by stoning for a woman. Joseph was visited by an angel who assured him that the unborn child was the immaculately conceived son of God and Joseph opted to become the child’s corporeal parent. The second-century Protevangelium of James and the fourth-century History of Joseph the Carpenter present Joseph as a widower with children when he met Mary and claim that he lived to the age of 111, none of which are accepted by the contemporary Vatican.

The earliest veneration of Joseph is traced to Egypt. Western devotion to him dates from the early 14th century, when the Servites, an order of mendicant friars, observed his feast on March 19, the traditional day of his death. Already a patron saint of Mexico, Canada, and Belgium, in 1870, Joseph was declared patron of the universal church by Pope Pius IX. In 1955 Pope Pius XII established May 1 as the “Feast of Saint Joseph the Worker” to counter the communist observation of secular May Day.

Sicilian lore tells of a severe drought that ravaged the arid Mediterranean island in the Middle Ages. When rains arrived and abundant harvests returned, altars and feasts of thanksgiving were created. Fava beans play a significant role in the folk customs surrounding St. Joseph’s Day altars. The beans, which can be cultivated in dry, poor soil, were considered fodder for cattle. In lean times, farm families ate them as well, considering themselves fortunate to have any in stock. Fava beans are given away as lucky tokens at St. Joseph’s altars. As a keepsake stored in a kitchen, they are meant to ward off hunger. 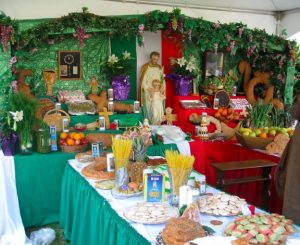 St. Joseph is considered the patron saint of fathers, workers, unborn children, travelers, and immigrants. Symbols of his profession often adorn St. Joseph’s Day altars, including breads molded in the shape of saws, hammers, ladders, and other carpentry tools. Lemons are a major cash crop in Sicily, and altars often contain bowls of the fruit. It is considered good luck to “steal” one from the display.

NOMA’s Saint Joseph and the Christ Child was donated in 1956 by Tulane professor W. P. Caar. It entered the fledgling collection of European paintings identified as a work by Giovanni Battista Tiepolo (1696-1770), though the attribution was always doubted and, rather, associated with a time period after his death. As part of the research for an exhibition of eighteenth-century Venentian works in 2017, the painting was credited to his son, Giovanni Domenico Tiepolo, who specialized in depictions of Saint Joseph. Tiepolo’s work ranges from light-hearted and playful depictions of St. Joseph to more solemn, tender depictions. In the last twenty years, scholarship has arrived at a clearer view of Domenico’s art and a core group of paintings that align closely in paint handling, expression, and figure modeling are now considered by his hand, and within which NOMA’s painting convincingly conform.