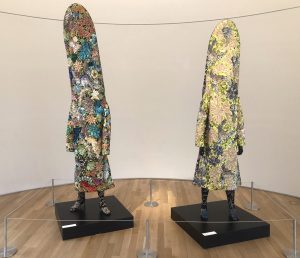 Equal parts sculpture and costume, the wearable Soundsuits of artist Nick Cave appear to defy convention and physics. Two of these wildly imaginative works are on view in the pavilion of NOMA’s Besthoff Sculpture Garden. New Orleans’ own folk traditions have played a role in their formation. “I’m looking at rituals and ceremonies: Mardi Gras Indian clothing, West African pieces, Carnival in Trinidad,” says Cave of the many inspirations behind this ongoing series, which began nearly three decades ago. Materials for Soundsuits have included sisal, dyed human hair, beads, plastic buttons, wire, twigs, feathers, sequins, crocheted doilies, children’s toys, and flea-market knicknacks. The sound refers to the audible qualities of the full-body costumes — they swish, chime, rattle, ring, or make other noises as they are worn for performances. Here are five facts about the artist and his signature works:

Nick Cave’s introduction to fabric art began with his customization of hand-me-down clothing during his childhood. Born in 1959 in Fulton, Missouri, as the youngest of seven boys, Cave would be dressed in shirts and pants that his older siblings would quickly outgrow. “When you’re raised by a single mother with six brothers and lots of hand-me-downs, you have to figure out how to make those clothes your own,” he told The New York Times in 2009. “That’s how I started off, using things around the house.”

Cave credits his mother with encouraging his budding talent, such as when she complimented his handmade birthday cards. Fabric also came to life during mother-son playtime. “When I was a little boy, my mother put a sock on her hand and made a puppet,” he told the Sydney Morning Herald during the installation of the exhibition Heard. “The transition from the sock being just a sock to it becoming my best friend in that moment was so enormous and yet so simple for me as a child. How do we get back to that innocence? How do we get back to that place of dreaming?”

Nick Cave was a professional store window decorator and performed with the Alvin Ailey Dance Theater. After graduating high school in Columbia, Missouri, in 1977, Cave enrolled at the Kansas City Art Institute where he studied both visual and performing arts. He initially pursued a career in retail, designing store windows for Macy’s and working in New York’s fashion industry. In 1979 he met famed dance director Alvin Ailey and began training with his eponymous African American ensemble. Cave also found stress release in discos. “I would go into the club and I would just work it out on the dance floor,” he said . “I wouldn’t talk to anyone and I would dance for about three hours.” Soundsuits are often activated through Cave’s dance choreography.

Cave created his first Soundsuit in 1992 as a response to the beating of Rodney King by Los Angeles police. “It was an almost inflammatory response,” said Cave, recalling news coverage of King’s beating on television in 1991. An acquittal of the police in April 1992 led to an outbreak of riots. “I felt like my identity and who I was as a human being was up for question. I felt like that could have been me. Once that incident occurred, I was existing very differently in the world. So many things were going through my head: How do I exist in a place that sees me as a threat?”

“I started thinking about the role of identity, being racially profiled, feeling devalued, less than, dismissed. And then I happened to be in the park this one particular day and looked down at the ground, and there was a twig. And I just thought, well, that’s discarded, and it’s sort of insignificant. And so I just started then gathering the twigs, and before I knew it, I was, had built a sculpture.” The name Soundsuit came from the rustling sound made by the wood sticks. Currently, Cave lives in Chicago, where he works at the School of the Art Institute of Chicago as a director of the graduate fashion program. He describes himself not as an artist but as a messenger as his work frequently deals with spectacle and responsibility.

More than 500 Soundsuits have been created since. Soundsuits camouflage the body, masking and creating a second skin that conceals race, gender, and class, forcing the viewer to look without judgment. “I found that I was interested in was this whole idea of discarded,” says Cave. “I started gathering materials at the flea markets and the antique malls. And so, for me, it’s me sort of taking these objects and reintroducing them and giving them a new sort of role … A lot of the things that you will find in a Soundsuit are things that we all recognize. You know, how do we look at things that are devalued, discarded, and bring a different kind of relevancy to them.”

Watch a news profile about Nick Cave and his Soundsuits.

In 2015, Nick Cave completed an eight-month artist’s residency in Shreveport that led to a multimedia performance titled AS IS. Cave led workshops with multiple social-service agencies in the city, including those serving the homeless, underserved children and their families, the disabled, and low-income senior citizens. Through public “bead-a-thons,” colorful plastic blankets, spirit sticks, and costumes were constructed that became props in a collaborative show at Shreveport’s Municipal Auditorium. “We’re beading our way through our problems and leaving our problems and struggles and stories in the artwork for the world to see,” said Jerry Davenport, among the teaching artists who worked on the project, as quoted in the Shreveport Times. “There are many stories told in those blankets — neglect, abuse — but it’s individual family stories that they want to show the community and help someone else who’s looking at that blanket that can identify with them.”

Of the residency, Cave said, “I’ve named the show AS IS because it’s how I want neighbors to see neighbors — as is — to celebrate what makes each of us unique … This spectacle of social consciousness is designed to transform the audience and I hope prompt them to ask, ‘How can we not accept each other as is?”