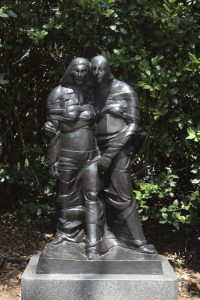 In Leonard Baskin’s bronze sculpture Ruth and Naomi, the biblical women are bound together by shared sadness and mutual support. The piece is based on the Old Testament story of Ruth of Moab, who after the death of her husband follows her widowed mother-in-law to the Land of Judah, stating in Ruth 1:16, “Do not urge me to leave you or turn back from you; for where you go, I will go, and where you lodge, I will lodge. Your people shall be my people, and your God, my God.”

Baskin created art during the last decades of the twentieth century in a figural, representational idiom because he believed in the moral duty of expressing the human condition. He criticized art movements such as Pop art as “an art of cowardice, a triumph of the trivial.” Baskin’s art focuses on the brutality and cruelty of the twentieth century. Nevertheless, many of his works celebrate the creative agency of the human spirit. Ruth and Naomi focuses both on the suffering of the women and the compassion they show for one another. Their legs meld into one base of a stalwart reinforcement, epitomizing the artist’s belief that sculpture should be about simple emotions.

Baskin was born in New Jersey in 1922 to an Orthodox Jewish family. His father was a rabbi. His early studies at a Brooklyn Yeshiva, a rigorous Orthodox Jewish educational system, instilled in him a respect for learning and a concern for Jewish heritage, which informed his artwork. After winning a Prix de Rome honorable mention for his first gallery show at seventeen, Baskin studied at New York University, Yale University, the New School in New York, and in France and Italy. He later served in the Navy and Merchant Marines and taught at Smith and Hampshire colleges.

Both the subject matter and execution of Ruth and Naomi are rooted in Baskin’s historicism, utilizing the traditional technique of casting and a biblical subject. Baskin trained initially in sculpture but also gained notice for his work in the ancient disciplines of printmaking, woodcuts, and etching.

Ruth and Naomi depicts misery but also celebrates the tenacity of humanity in the face of hardship. The women hold one another upright and look sadly toward their new home. The simplicity of the square-shape of the figures allows them to be generalized by the viewer to represent the human condition. The de-individualization of Baskin’s figures was influenced by Sumerian sculpture, the figures of Pompeii, and the German Expressionist Ernst Barlach, whose works also minimize naturalistic details to better focus on the weight in space of the figure. Baskin preferred the human form as the subject of his sculptures because of its ability to represent both one figure and everyone: “[i]t contains all and can express all.”

Baskin died in 2000 at the age of 77, organizing exhibitions of his work from his deathbed. His most well-known sculptures include a Holocaust Memorial in Ann Arbor, Michigan, and a relief at the Franklin Delano Roosevelt Memorial in Washington, DC. Over the course of sixty years, his work maintained his focus on the moral life of humans, based on his belief that, “Human beings have not changed. No matter how fast we go, we still function as physical beings. That is of overwhelming importance to my art—the continuum of human life—that is what makes art sublime.”

This Object Lesson, written by Sara Hoffman, is excerpted from The Sydney and Walda Besthoff Sculpture Garden, a book that comprehensively covers installations in the original section of the Garden, which opened in 2003. The book is available for purchase online at the Museum Shop.