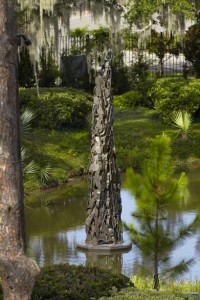 Pablo Casals’s Obelisk, a towering accumulation of welded bronze cellos, dominates the waters of a lagoon in the Sydney and Walda Besthoff Sculpture Garden. Standing over twenty feet tall, the Obelisk is an imposing example of monumental sculpture by Arman.

Arman’s decision to use musical instruments in many of his works was influenced by his love of music , and his father, Antonio Fernandez, who was an amateur cellist. Inspired by Egyptian obelisks as commemorative monuments, Arman adapted the obelisk form to pay homage to the world-renowned Spanish-Puerto Rican cellist and human rights activist Pablo Casals (1876–1973).

Born Armand Pierre Fernandez, Arman dropped the “d” in 1957, preferring the way his name appeared after a typo occurred on a gallery announcement. In his youth, Arman helped his parents with their family-owned antique shop, an experience that later undoubtedly influenced his “very strong feeling about objects.” He began perspective drawings at the age of four and learned to paint from his father at the age of ten. After graduating from high school in 1946, Arman enrolled in the École des Beaux-Arts in Nice. Rebelling against the conservatism of the school’s administration, he left the École in 1949 without his diploma. That same year he enrolled in the École du Louvre, where he studied archeology and Asian art, with the goal of becoming an auctioneer. Unsatisfied with this course, he abandoned the school in 1951.

In 1954, Arman decided to become a full-time artist and began to create abstract paintings that were heavily influenced by Nicholas de Staël, a Russian-born Parisian painter known forks heavy blocks of color. Arman created the first works that he considered to be in his own style in 1955. Called Cachets, the works used commercially produced inked rubber stamps densely imprinted on sheets of paper. These Cachets were exhibited alongside Arman’s first abstract paintings in his first solo exhibition in 1956. Although Arman devoted most of his career to three-dimensional sculpture, critics saw this exhibition as the moment when Arman announced his two most distinctive characteristics: his use of ready-made materials (referred to as “Poubelle” or “refuse” in French) and his reliance on the accumulation of objects.

Arman’s early three-dimensional work consisted of glass vitrines filled with carefully selected found objects such as handguns, coffee pots, typewriters, gas masks, hair combs, and cameras. In this regard, his work has been related to Marcel Duchamp’s readymades and Kurt Schwitter’s collages. However, Arman preferred the term “accumulations” to distinguish his work from the Surrealist tradition of assemblages. In an interview in 1968, Arman described himself as having the “instinct of a rat pack collector.” He believed that by increasing the quantity of objects in his sculptures, his viewers would perceive these objects differently. Arman’s use of everyday objects in his art connected him to the Nouveaux Réalistes movement, which he helped found in 1960 with French artist Yves Klein. In opposition to the lyricism of the abstract painters of the 1960s, the Nouveaux Réalistes advocated for the reintroduction of realism in art in order to create a “new perception of reality,” without figuration.

Much of Arman’s focus in his later years was on the creation of monumental outdoor public works. Two of his best known works are Long Term Parking (1982), a stack of fifty-nine cars embedded in concrete on the outskirts of Paris, and Espoir de Paix (Hope for Peace) (1995), a giant stack of tanks and other military vehicles in Beirut. Arman created all of his large-scale sculptures to be viewed in the round. Of his public work Arman has said, ” The monumentality of the large projects increases the effect of the statement. As a species, we have an interest in hierarchies, in dominance, and a very large work hs a dominant effect that is very rewarding if you want to express yourself.”

This Object Lesson, written by Miranda Lash, is excerpted from The Sydney and Walda Besthoff Sculpture Garden, a book that comprehensively covers installations in the original section of the Garden, which opened in 2003. The book is available for purchase online at the Museum Shop.