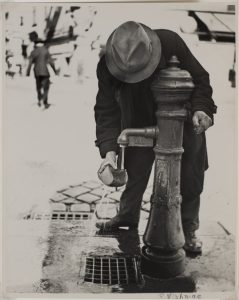 In 1935, Roman Vishniac was hired by the American Jewish Joint Distribution Committee, a leading humanitarian assistance organization, to photograph Jewish communities throughout Eastern Europe. Over the next few years, Vishniac built an extensive visual record of life in these communities, chronicling poverty in major urban centers and small villages alike. Although many of these communities were centuries old when Vishniac photographed them, his body of work would soon prove to be the only comprehensive document at the very end of their existence, as the Nazis systematically eradicated Jewish life in Europe.

Here, Vishniac captures a poignant gesture: a man soaking a piece of hard, stale bread at a water pump just to render it edible. The stones and cement around his feet are stained dark from the water and register clearly in the photographic negative, while the rest of the street and much of the background is blown out by the harsh light of day. The result is a portrait of isolation. It is now almost impossible to separate these images from the history that followed them. What in another context might be only a simple, if powerful, document of impoverished life becomes a haunting elegy for a life already circumscribed by the specter of death.