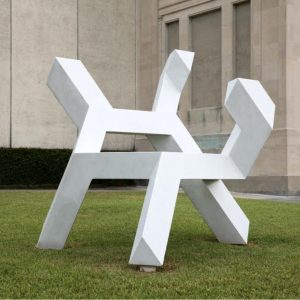 Tony Smith is one of the foremost sculptors to emerge from the Minimalist movement of the 1960s. Born in South Orange, New Jersey, in 1912, he studied at the Art Students League of New York and trained as an architect at the New Bauhaus in Chicago in 1937 and 1938. After working as an apprentice with Frank Lloyd Wright from 1938 to 1940, he was active as a practicing architect until 1960 and taught at New York’s Cooper Union and Pratt Institute in the 1950s. Smith suddenly emerged as a sculptor in the 1960s and his huge, geometrically simple sculptures, painted black, made his reputation almost overnight.

Lipizzaner marks a departure for the artist since it is painted white. The sculpture is made of 1/4-inch thick steel plates and is the result of Smith’s interest in tetrahedra and octrahedra modules. It was fabricated at Industrial Welding in New Jersey, shipped to New Orleans, sandblasted on the site, and then spray painted with white auto enamel.

Lipizzaner grew rather arbitrarily out of an earlier experimental piece titled Crazy Horse. While playing with the pieces of Crazy Horse, which fell apart several times, Smith conceived New Orleans’s Lipizzaner. The title of the piece is a reference to the white stallions of the Spanish Riding School in Vienna, Austria, because the complex surface of the modular forms in Smith’s sculpture suggests a prancing horse.

This Object Lesson, written by Joan G. Caldwell, is excerpted from the New Orleans Museum of Art Handbook, available for purchase in the Museum Shop. Lipizzaner is on view outdoors on the left side of the front steps of the museum.