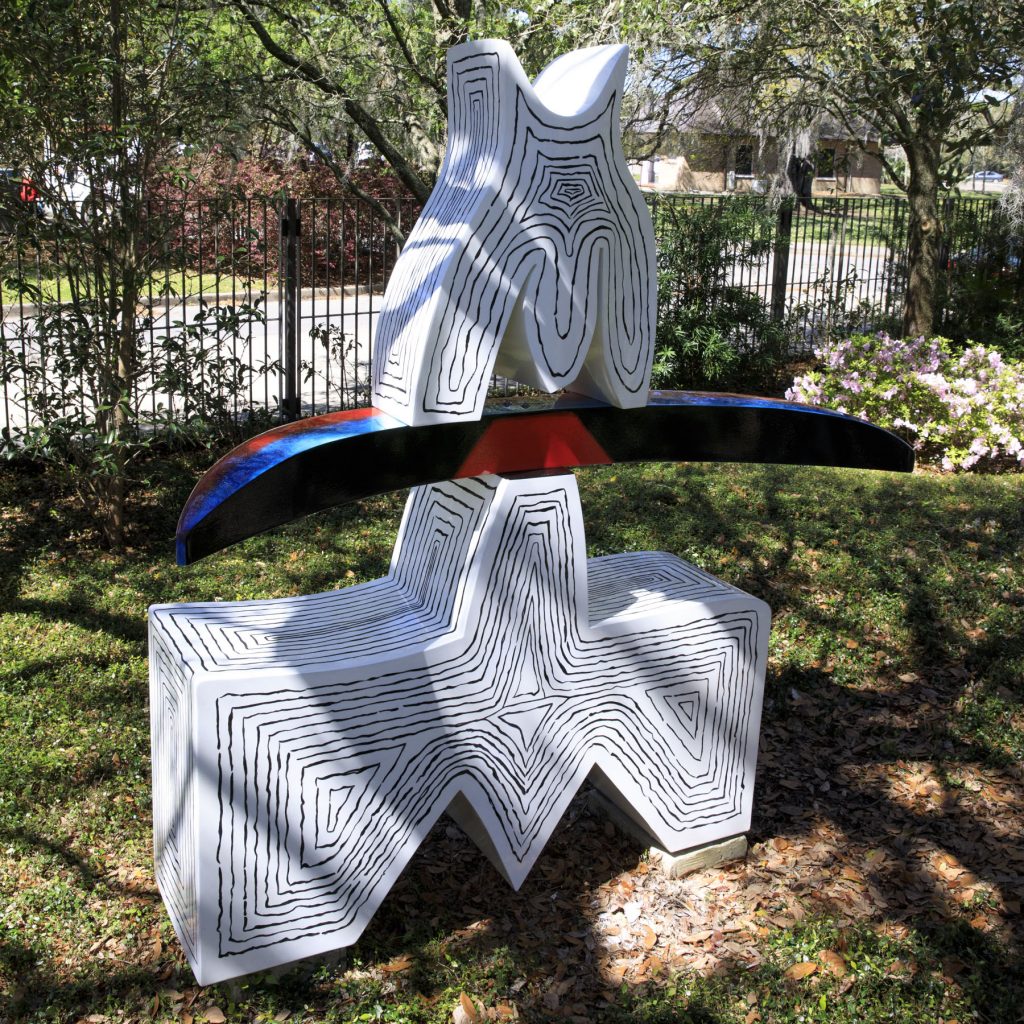 “I’m after the beautiful, not the pretty side of things. Art is too spiritual a matter for me to take lightly.”
—Ida Kohlmeyer

This month, Ida Kohlmeyer’s painted aluminum sculpture Rebus 3D-89-3 returns to the Sydney and Walda Besthoff Sculpture Garden, newly refreshed from structural repairs and brandishing a brand new coat of paint. The expert restoration—undertaken by Kohlmeyer’s longtime fabricator G. Paul Lucas of Lucas Limited in Louisburg, Kansas—brings the work back to its intended brilliancy and allows us to appreciate the work of one of Louisiana’s most influential and enigmatic abstract artists anew.

Kohlmeyer, a native New Orleanian, is nationally recognized for her vibrant abstract paintings and sculptures, which are among the most vanguard works of modern art made in New Orleans during the twentieth century. She is best known for her signature “cluster” compositions: large painted canvases divided into loose grids filled with vibrantly colored abstract shapes and forms that are at once abstract, linguistic, and deeply personal.

These symbols—either gridded on canvas or presented as freestanding sculptures—exist as a kind of pictographic code, inviting us to try to decipher their meaning, but always evading any clear reference or easy interpretation. Often titling her sculptures Rebus, a term that refers to a type of puzzle or “picture riddle” in which words are represented by combinations of pictures and letters, her work feels like a code that we are never quite meant to crack.

Kohlmeyer did not start painting until her 30s, after she was already married and the mother of two young children. It was a daring move for a married New Orleans society lady in 1950s New Orleans to take up something so odd as abstract art. Kohlmeyer felt called to paint, and in 1950, at the age of 38, she enrolled as a special student in the MFA program in painting at Newcomb College at Tulane University and went on to study with Hans Hoffman in Provincetown and Mark Rothko while he was a visiting professor at Tulane in 1957. As Kohlmeyer has described in interviews, it took her over a decade to shake off the influence of these artists—and the privileging of white male genius rampant in the art world—to develop her own voice, and unique vision for abstract art.

While she is perhaps today best known her for paintings, her sculptures stand as among her most daring artistic contributions. Created in clusters of tiny tabletop works of just a few inches each to daring free-form compositions of over 100 inches high, like Rebus 3D-89-3, Kohlmeyer’s sculptures brought her painted compositions out into real space. As art critic Theodore F. Wolff wrote in 1986, a few years before Kohlmeyer created Rebus 3D-89-3, “The real miracle of her career is to be found in her wildly imaginative, brilliantly colored sculpture. There is simply nothing else like it anywhere—very possibly because Kohlmeyer, having no extensive training in three-dimensional work, had no preconceptions about the nature of sculpture to overcome. She could, as a result, be as audacious as she wished.”

While this work’s title, Rebus, refers to a puzzle, it also calls to mind one of the most common conventions of sculpture, the portrait bust. Carved out of white marble, such busts most typically represented so-called “great men,” allegorical goddesses, or momentous events of history. Also painted in stark white, Kohlmeyer’s Rebus sets this tradition of monumental, referential sculpture on its head. If public sculpture’s history has in large part been about representation, about showing the visages of real people and narrating known events, Kohlmeyer makes that tradition suddenly abstract, inscrutable, strange. She remakes this staid classical tradition into an ersatz composition of squiggly lines and irregular shapes stacked haphazardly one atop the other, seeming about to topple over at any moment to make way for something new.

Rebus: a bust, reimagined, and a classical tradition, remade.

—Katie A. Pfohl, Curator of Modern and Contemporary Art