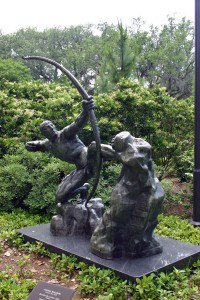 Winning a prize at the Ecole des Beaux Arts in Toulouse, and the acclaim of his teachers resulted in Antoine Bourdelle’s receiving a scholarship to the Ecole des Beaux Arts in Paris. There he studied briefly with Alexandre Falguiére, then with Jules Dalou and finally Auguste Rodin. Aside from his work as a sculptor, executing such major public commissions as the Franco-Prussian War Memorial in Montauban, Bourdelle gained fame as a teacher after 1900.

From 1900 to 1907, Bourdelle worked on the model for Hercules the Archer, which is his most famous work. In Roman mythology, Hercules is known for his strength and numerous far-ranging adventures, including a cycle known as the “Twelve Labors,”  which includes the slaying of the Nemean lion, the capture of the golden hind of Artemis, and stealing the apples of Hesperides. In the Archer sculpture, Hercules is depicted in the sixth of his labors, the shooting of the Stymphalian birds, a flock of mythological man-eating raptors with bronze beaks, sharp metallic feathers they could launch at their victims, and poisonous dung.

As a model for the body, Bourdelle chose an accomplished sportsman and military commander, Paul Gustave André Doyen-Parigot, whom he had met during informal Saturday receptions at the studio of Rodin. Doyen-Parigot would later be killed during World War I at the Battle of Verdun. His face appears on the bronze of Bourdelle’s fifth study, the most accomplished of all the editions produced, but the officer who sat for him did not wish to be recognized, and his features disappeared in the sixth sketch, becoming more stylized.

The bronze cast of Hercules the Archer in the Besthoff Sculpture Garden was made after Bourdelle’s death. It is the tenth and final cast of the original and was made under the supervision of his widow, Cléopâtre Sevastos. Other casts can be found in such diverse collections as the Museé National d’Art Moderne, Paris; National Gallery, Prague; the Metropolitan Museum of Art, New York; and the Public Gardens of Buenos Aires.

This Object Lesson, written by Joan G. Caldwell, is adapted from the New Orleans Museum of Art Handbook, available for purchase in the Museum Shop.