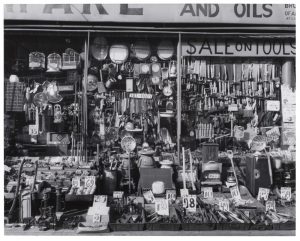 Berenice Abbott began her Changing New York project in 1929, an effort to document the city’s transformation as New York entered a new period of demolition and redevelopment. The New Deal’s Federal Art Project began to sponsor her work in 1935 and four years later Abbott published the definitive edition of Changing New York. Together, the works expressed Abbott’s concern that as a new wave of industrialization pushed buildings higher and higher, the city would lose elements that fit a human scale. Much of her work focused on new behemoth skyscrapers, but she also turned her large-format camera towards bustling sidewalks and storefronts like this hardware store in the Bowery.

Abbott’s street-level photography in New York often includes a riot of goods for sale, signs with text and numbers, and people milling about that overlap to create patterns that keep your eyes as busy as the streets themselves. To focus on commerce during the Great Depression might seem odd, or depressing, since potentially, these goods were piled up because no one was buying them. As this is a hardware store however, this photograph strikes me as different from other images of sale goods. Many of these objects in Abbott’s photograph are used to repair and fix the things in our homes. The abundance in the photo also reflects the desire and tenacity of people in 1938 to make the things they already owned last a little longer. To put it another way, a carefully considered purchase at this hardware store, could in fact be an act of frugality. Today, our growing need to think openly and creatively about how we can reuse and repurpose the things we already have makes this photo resonate a little more strongly. This is a great example of how a photograph, while it carries the information and meaning of the exact time it was made, also picks up meaning as it moves through time, and as viewers, we interpret it through the lens of the present.