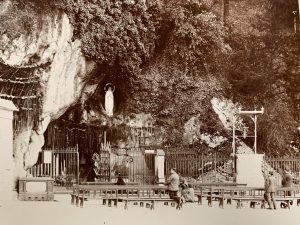 This photograph depicts the Grotto of Massabielle in Lourdes, France, where in 1858 Bernadette Soubrious claimed to witness an apparition of the Virgin Mary seventeen times. The vision implored Soubrious to drink water from a small spring in the cave and then asked for a chapel to be built. The vision told the young woman “I am the immaculate conception.” Soon after, the grotto was established as a shrine and a Catholic sanctuary was built on the grounds. The Vatican canonized Saint Bernadette in 1933, and replicas of the Lourdes grotto proliferated around the world (several exist in New Orleans). Hundreds of thousands of pilgrims still visit the grotto every year, many to drink the spring water which is believed to have miraculous healing properties. In this photograph, several supplicants kneel in prayer. Hundreds of crutches, presumably from sick or infirm visitors line the walls of the grotto, a grim reminder of our fragile health but also a testament to the great religious faith that draws people to Lourdes.

In the late nineteenth century, inexpensive albumen prints like this were commercially produced in large numbers and easily distributed around the world. Religious-themed photographs were among the most popular. A visitor to Lourdes could purchase one as a souvenir, or you could order one from a photographer’s catalog without ever making the pilgrimage. For a person of faith, viewing this photograph in an album or on the mantle could call up those same feelings of hope and reverence across time and space.