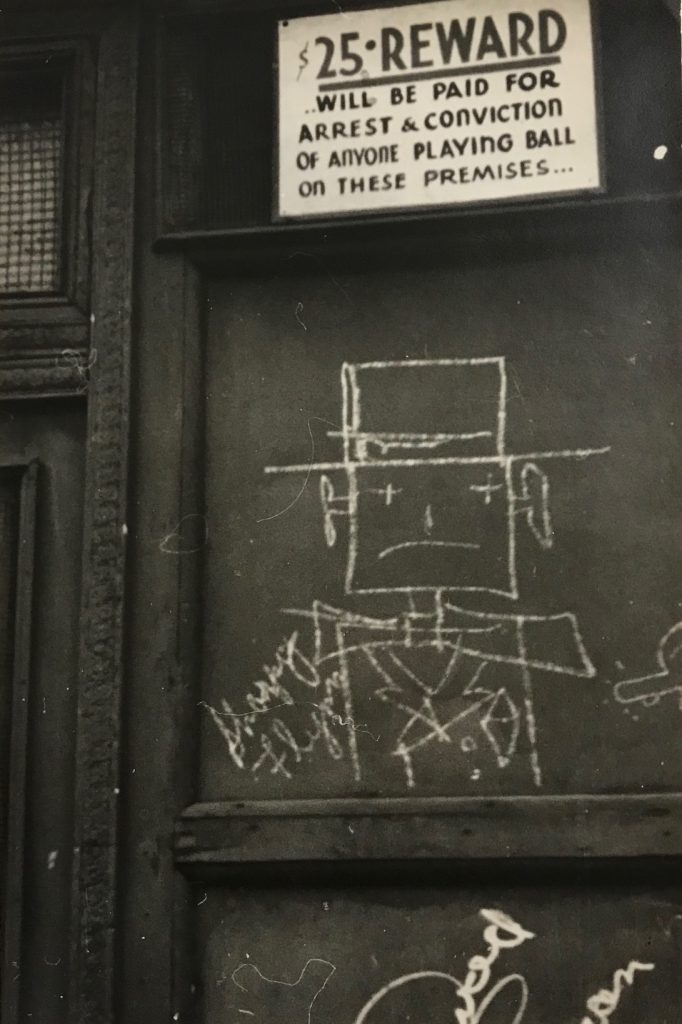 A unique object in NOMA’s photography collection gives us the opportunity to consider the relationship between two well-known photographers. This print, of a graffiti and sign covered wall from New York City, was for a while attributed to Walker Evans, the first photographer to have a solo show at the Museum of Modern Art in 1937. 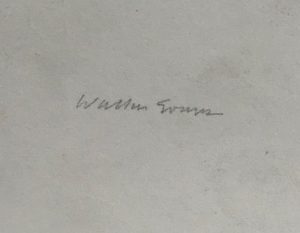 The print, which is signed by Evans on the back, is old or what we might call “vintage,” meaning it was likely made at about the same time as the creation of the negative, probably in the late 1930s. At that time, Evans was interested in graffiti as a reflection of urban life: cultural scribblings through which locals could anonymously voice their displeasure, grief, happiness or excitement. NOMA’s print includes a variety of different elements that hint at the world that surrounded them: a sign points out the financial consequences of “playing ball on these premises” ($25) while the graffiti, a figure with crosses for eyes may be a humorous response to the sign, as if to lament the death of handball in the neighborhood, or perhaps more seriously, it might memorialize the loss of a local resident.

All of these elements—the signature, the time period, the incisive way of looking at the world—seem to confirm that Evans made this picture. But sometime around 1970 another inscription was added to the back of our print. 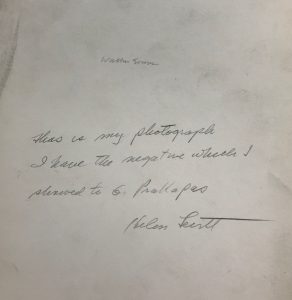 This inscription, also in pencil, but in a different hand states “This is my photograph. I have the negative which I showed to G. Prakapas.” A little further down, we see that this inscription was added by another well-known photographer, Helen Levitt, who also signed the print. G. Prakapas refers to Eugene Prakapas, a photography collector and dealer from whom this print was purchased by NOMA sometime after Levitt cleared up the issue of the print’s authorship and added her definitive declaration.

How did it come to pass that Walker Evans signed a print of a picture that he never made? In the 1930s, Evans and Levitt worked together frequently. In the winter of 1938, the two photographers made a series of pictures on the New York Subway.

In order to capture un-solicited and spontaneous portraits of people seated directly across from him, Evans painted the metal parts of his lens black and then positioned it under his topcoat with the lens poking through two buttons in his jacket. A cable release shutter button snaked down his sleeve and into his hand that he could click with a swift, almost invisible motion. He explained his process: “No viewing…Sort of done from the belly.” Levitt worked with Evans, borrowing his camera to make pictures the same way, which often makes it difficult to determine which pictures are by Evans and which are by Levitt. 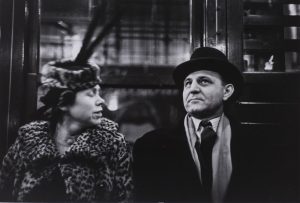 We know, however, that the image pictured below was taken by Walker Evans, because the woman that appears in it is, in fact, Helen Levitt. Levitt confronts the camera, knowingly, seriously, and probably quickly so as not to give up their game of underground surveillance.

These pictures and indeed this whole story describe a complex and intimate relationship between these two photographers and suggest why NOMA’s print carries both of their signatures. In the late 1930s with both photographers working on similar projects and even working together within the cramped confines of a New York Subway car, it is unsurprising that the two traded prints with each other, and not on just this one occasion.  Evans was a notoriously sloppy record keeper, so we can only assume that at some point, probably many years later, an interested dealer noticed our picture on a pile in Evans’s office or studio and asked the photographer for it. Evans no doubt obliged by signing the back of a print before handing it over. Around 1970, Levitt probably noticed it in Eugene Prakapas’s home, labeled as an Evans, and then produced the negative to prove that she made the picture. 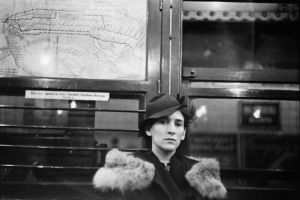 In the end, Walker Evans’s mistake, and Helen Levitt’s recognition of it, leaves us with a wonderful and rare artifact that links these two major figures in American photography and gives us a story to tell that raises questions about photographic style, collaboration, and authorship. Questions that sometimes may only be answered years later by close attention to the photographic object itself.