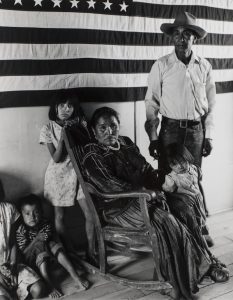 Through the course of the nineteenth century, white photographers making portraits of Native American sitters generally framed their subjects in stereotypical ways that exoticized their culture. Many of these photographs augmented the myth that Native American populations could not assimilate into white society and were destined to disappear. Such parallel ideas were often evoked to justify violence and forced removal of Native groups. When Laura Gilpin first photographed Mrs. Fancis Nakai, seated i this image with her son in 1932, the portrait bore marks of Gilpin’s training in pictorialism, a sentimental style of photography that employed techniques like soft-focus lenses and rich printing methods. Many photographers in this style, like Edward Curtis, romanticized and idealized Native life while ignoring the traumas and challenges created by the government’s policies. Where Gilpin differed from other white pictorialist photographers was that she continued to return to the Navajo territory to cultivate relationships with her subjects. By the time of this photograph, Gilpin had moved towards a style more aligned with the social documentary photographers of the New Deal and portrayed her subjects in a straight-forward but empathetic manner.

Following a period of internment by the US government in the mid-nineteenth century, the Navajo, or Diné people, signed a treaty in 1868 granting them reservation land in New Mexico. The following decades saw expansion of this territory, but also repeated incursions by the Bureau of Indian Affairs and other tribal groups. The Great Depression hit the Navajo reservation hard, compounded by government efforts to limit Navajo livestock cultivation that consequently hurt their livelihood. In the 1940s and 1950s, the federal government forwarded policies designed to force assimilation and dissolve Native American tribal affiliations.

By 1950 Gilpin has been working with the Nakai family for the better part of two decades. In this photograph Francis Nakai stands with four of his grandchildren and his wife (seated) in front of a large American flag. In fact, the flag on the wall had been given to the couple by the US government, after their son was killed in service during World War II. Mr. Nakai appears slight, in work clothes that are slightly too large. He bears the hint of a smile, but his grandchildren seem apprehensive. Mrs. Nakai appears weary and tired, in contrast to her 1932 portrait. The young boy wears no shoes and one of the granddaughters has dirt on her knees. The overall impression of the Nakai family is a somber one, a picture of a family pulled closer by difficult lives. Taken just five years after the end of the war, this photograph is testament to the Nakai family’s patriotism, but it is also an indictment of the nation for failing to live up to its ideals for its Navajo citizens, even as many of their sons paid the ultimate sacrifice during wartime.

Following a period of renewed activism in the 1960s, the Diné people reorganized as the Navajo Nation in 1969. Today it is the largest Native American territory in the continental US, and a little over half of the approximately 330,000 Diné people live there. Like many Native groups, the Navajo Nation faces dire poverty, low employment, and structural inequity. Recently, issues like a lack of running water, high rates of diabetes, and lack of housing stock have exacerbated the Covid-19 crisis on Navajo lands. Residents continue to work to maintain their culture, while also struggling to claim the full benefits of American citizenship.