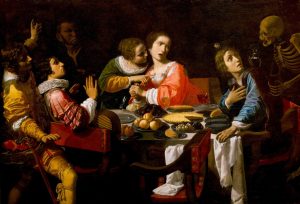 While their story-telling symbolism is as old as Christianity itself, “memento mori” paintings saw a particular popularity in seventeenth-century Europe. It was a time of tumultuous politics and religious instability even as wealth flooded in from overseas. The Baroque art that bloomed during this period reflects the contrast between these two realities, as tensely captured here by Florentine painter Giovanni Martinelli in NOMA’s Death Comes to the Banquet Table.

Artists use “Memento mori” (literally, “remember you must die”) symbolism to remind us of the preciousness of life. This dramatic painting depicts a dinner party disrupted by the sudden appearance of a skeleton (Death), who reveals an empty hourglass to one of the revelers. Martinelli makes use of artistic tenebrism, or dramatic illumination, to heighten the scene. The featureless black of the background serves to obscure the skeleton and further accentuate the vibrancy of the diners’ fine clothes and the abundance of food on the table. It is in the subtler details, like the pie sitting in front of the victim, where Martinelli reveals the moral lesson of his painting. The pie is the fullness of life, from which the young man has only experienced a sliver. The pie’s missing slice is situated between two glasses of wine: one red, one white. The red wine, symbolizing church communion sacrament, is elevated and isolated on a separate tray. The white wine, symbolizing earthly concerns, lies closer to the pie sliver, revealing Martinelli’s moral that the victim’s short life was lived pleasurably on earth but neglectful of spiritual concerns.

At the time of this painting, Martinelli’s native Italy was experiencing multiple outbreaks of plague, a side-effect of the Thirty Years’ War (1618 to 1648). Whereas the ravages of war could be nominally avoided by the wealthy, disease struck quickly and indiscriminately killed both rich and poor. Memento mori pictures like Death Comes to the Banquet Table would have been purchased by wealthy patrons to signal their piety and humility even as they surrounded themselves with material luxuries allowed by new international trade.

In Death Comes to the Banquet Table, Martinelli’s palette is dark and his “Memento Mori” message is foreboding. But the dramatic tenebrism of the darkness also makes the light more beautiful. While the lesson intended by Martinelli was to remind viewers of the sacred, a broader understanding of the painting reminds us to focus on what is important and meaningful during our time on earth.