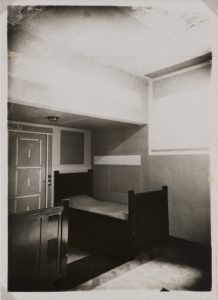 Photography has often been employed in the service of recording exceptional spaces, but a photograph always more or less distorts the space it is supposed to record. The distortion may enhance the true nature of the interior or it may severely misrepresent it. In this photograph, for example, a bright and colorful space is reduced to a collection of whites, blacks, and grays, creating an interior that seems far more severe than it actually is. The room was collaboratively designed by Piet Klaarhamer and Vilmos Huszár for the two sons of the wealthy Dutch industrialist Cornelis Bruynzeel Jr. Klaarhamer was responsible for the design of the house and the furniture, and Huszár was responsible for what is effectively erased in this photograph: the color design. Born in Hungary, Huszár moved to the Netherlands in 1905 and became one of the founding members, in 1917, of De Stijl, a movement that advocatedreducing forms to their essential shapes and colors. Completed in 1919, this Bruynzeel house was, therefore, a very early expression of De Stijl practice. Huszár based his design of the room on Vincent van Gogh’s painting Bedroom in Arles (1889), the colors of which he described as soothing, but he condensed the expressionistic and voluminous forms of the painting into the flat, rectangular planes of the walls and the furniture. These planes were painted bright shades of blue, red, and yellow, separated by patches of black, white, and gray. Huszár produced his own photographs of the space, employing the camera ostensibly as a documentary tool; however, through the reductive nature of black-and-white photography, the space was so completely transformed that the resulting images are more creative than descriptive. Unencumbered by the bright colors, the room’s structure and patterning, progressive for its time, become the sole focus.