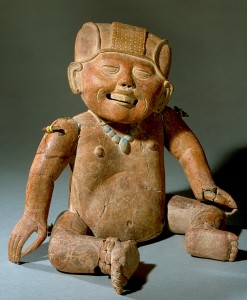 Smiling children with subtly rounded bodies are among the best-known types of clay figurines from the Veracruz area of Mexico. Skillfully made of thin-walled clay, they are composed of two parts: a hand-modeled body and mold-made face. The movable limbs are attached to the body by strings, a device which permits the arms and legs to move to different positions. As a rule, these smiling children are modeled in a standing position with their legs apart and their arms raised or stretched out in an attitude of joy.

The smile is a typical feature in the artistic expression of the Totonac-speaking people along the eastern Gulf of Mexico around Veracruz. The most interesting feature of this piece is the combination of articulated limbs and a moveable head, which is held in place by a cone-shaped but invisible neck.

The precise function of these figures is unknown. It has been suggested that these smiling children represent Xochipilli, the god of dance, music, and joy. According to another source, they may have been sacrificial victims of the gods, kept in good humor with inebriating potions or drugs. Still another source claims they were used as puppets or dolls. Whatever their function, they are the most expressive attempt by New World artists and artisans to represent a mood rather than a god or an activity.

This Object Lesson, written by Joan G. Caldwell, is excerpted from the New Orleans Museum of Art Handbook, available for purchase in the Museum Shop. The Articulated Figure is on view in the third-floor exhibition of Art of the Americas.