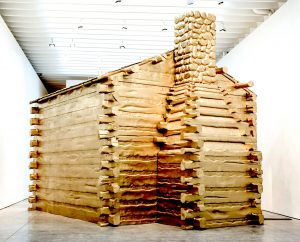 Will Ryman’s large-scale sculpture America is a reflection on the industries and economies that built the United States of America over the past few centuries. America is made of many materials, each of which have been carefully selected and arranged by Ryman to reflect the legacy of capitalism in this nation.

The overall structure is a life-size replica of a log cabin made of wood and coated in gold resin. The humble structure evokes the boyhood home of Abraham Lincoln, who played a prominent role in preserving the Union during the Civil War (1861–1865) and advancing the abolition of slavery with the Emancipation Proclamation (1863). The cabin’s gilt color symbolizes the gold many have long sought in America, beginning with the Spanish conquistadors to the Calfornia Gold Rush and beyond.

Inside the cabin are geometric, mosaic-like panels on the walls, ceiling, and fireplace, made of a wide assortment of symbolic materials. Together these objects refer to the major industries and historical trends that shaped the American economy. The panels are arranged in stripes, not unlike stripes on the American flag. An arrangement of arrowheads evokes the livelihood of Indigenous peoples (and their eventual conflicts with colonists). Shackles and chains make up the cabin’s foundation, alluding to the role of slavery in building the United States. The mosaic includes bullets used in American wars, including the Civil War and World War II. Pills evoke the pharmaceutical industry. Railroad ties and car parts represent transportation. Cotton connects to the manufacture of textiles, while corn symbolizes agriculture. Soda tabs: fast food. Phone cords: telecommunication. Ryman’s inclusion of keyboards, iPads, and iPhones brings the montage into the 21st century and the ever-evolving role of technological achievement.

“I’m really interested in how the world got to be the way it is today,” Ryman told Autre magazine in 2015. “That’s a huge topic. Within that, I’m interested in external issues like how the system—mass production, capitalism, technology, social issues—how that evolved to the way it is today. My work is about retracing that and exploring what’s underneath all that through natural resource materials.”