The Northern European European galleries were entirely reconceived in May, thanks to the generosity of Alvin and Carol Merlin. Several paintings from NOMA’s permanent collection have undergone much-needed conservation and were reinstalled with new interpretive texts based on the latest art-historical research. Visitors to newly refurbished galleries may also recognize the new color of the walls—the same deep aubergine paint color from the Dutch Cabinet in NOMA’s major exhibition from 2018, The Orléans Collection.

The first gallery is dedicated to the Northern European Renaissance, a “rebirth” of art, science, and philosophy, took shape in the fifteenth and sixteenth centuries.  During this period, artists working across the Netherlands (Holland, Belgium, and Luxembourg) became more interested in the natural world. They created several new techniques and materials to depict human, animal, and plant life, including the use of oil paint. Unlike egg-based tempera, oil paints are thick, slow to dry, and richly pigmented. Northern European oil paintings convey a wide variety of details and textures, including flower petals, fabric, and flesh. A newly accessioned flower still life by Jan Brueghel the younger, for example, represents exotic botanical specimens arranged in a kraak porcelain bowl, derived from the Dutch word for the Portuguese merchant ships that first imported Chinese ceramics to Northern Europe. 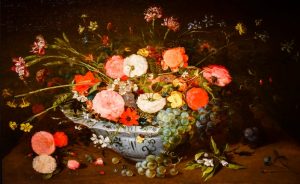 The second gallery is dedicated to the art of the Dutch Golden Age. After gaining independence from Spain in the seventeenth century, the Dutch Republic became one of the greatest economic powers in Europe. During this period, the Dutch expanded their colonial empire to Africa, Southeast Asia, and South America, and established a global trade network for imported luxury goods, including porcelain, textiles, spices, and botanical specimens—as well as enslaved people. Cosmopolitan cities, like Amsterdam, Leiden, and the Hague, were increasingly populated by wealthy bankers and merchants who profited from this international trade. Dutch artists responded to the demands of this new class of patrons by painting portraits, still lifes, and seascapes, representing the riches of the Dutch maritime empire.

NOMA’s newest Northern European acquisition, An African Woman by Willem van Mieris (Dutch, 1662–1747), is on view in this second gallery for the first time. Leiden-based fijnschilder (fine painter) Willem van Mieris’s depiction of a beautiful young African woman is a tronie—a fantasy portrait based on a live model, often wearing an elaborate costume. Van Mieris was probably familiar with the most famous tronie of the previous century: Johannes Vermeer’s Girl with a Pearl Earring. 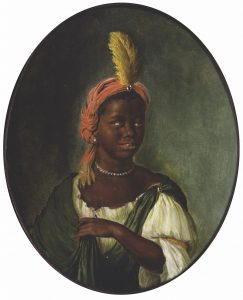 This summer, come cool off in the Northern European galleries, and rediscover the Dutch and Flemish paintings in NOMA’s permanent collection. These gems, freshly re-installed, provide compelling insight into the intellectual developments and cultural exchanges that animated Northern Europe during the fifteenth through the seventeenth centuries.

READ MORE about NOMA’s acquisition of the African tronie in this feature from NOMA Magazine.