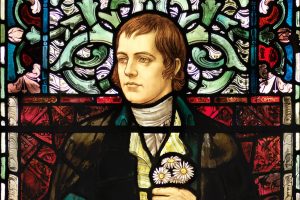 A stained-glass window inside Bute Hall at the University of Glasgow depicts Robert Burns, the Bard of Scotland.

More than 200 years after his untimely death at age 37, the satirical wit and poignant prose of Scottish wordsmith Robert Burns are cherished by legions the world over. On or about the anniversary of his birth on January 25, 1759, elaborate dinners, pub parties, and other festivities are staged by literary fans in homage to the man who earned the humble title of Ploughman Poet for putting pen to paper and recording the hardscrabble toil, resilient humor, and romantic ideals of his fellow Scotsmen. Burns’s writings, filled with keen observations of human nature and a call for social equality, have a universal appeal that extends far beyond the crags, lochs, and moors of his homeland.

In partnership with The NOLA Project theater company, NOMA will join global commemorations on January 31 from 5 to 9 pm as Friday Nights at NOMA takes on the distinctive character of the Highlands with bagpipe music, folk dancing, a ceremonial parade in tribute to the national dish of Scotland—the oft-maligned haggis—and readings of Burns’s most beloved works by professional actors and volunteer visitors. The wearing of kilts, tam o’shanters, and tartan plaid is encouraged — along with sensible intake of Scotch whisky for guests over age 21.

“What makes a Robert Burns Night special is community participation,” says A.J. Allegra, artistic director of The NOLA Project. “Burns championed the common man, and we want everyone in New Orleans to join in this night of food, drink, music, readings, and fun.”

Who was Robert Burns?

Robert Burns, also known familiarly as Rabbie Burns, was born into rural poverty and witnessed his father struggle to earn a living off the land outside the village of Alloway, South Ayrshire. The family’s bankruptcy deepened Burns’s distrust of the religious and political establishment. The hardships imposed by a rigid class system imbued his writing with a plebeian cynicism and a spirit of revolution. Bored with the drudgery of farm chores, Burns would draft poetry while taking breaks in the fields and barn. He recorded his first verse at age 15, “Handsome Nell,” about his first love. He later said, “I never had the least thought or inclination of turning poet till I got once heartily in love, and then rhyme and song were, in a manner, the spontaneous language of my heart.”  With the reputation of a promiscuous cad, Burns fathered twelve children to four different women. His first out-of-wedlock child was born to his mother’s servant. His lastborn child, Maxwell, was birthed on the same day as Burns’s funeral on July 25, 1796. Many of his poems dealt with the thrill of romantic pursuit and the heartbreak of unrequited love. 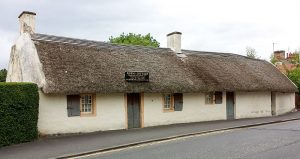 The Robert Burns Cottage, site of the poet’s birth in 1759, is now a house museum in Alloway, South Ayrshire, Scotland.

As a young man Burns considered immigrating to Jamaica, but upon critical praise of his first published book of poetry in 1786, Poems, Chiefly in the Scottish Dialect, he opted to move to Edinburgh. In 1791 he took a job as a tax collector in the small town of Dumfries and continued to write and gather Scottish songs. That year he published “Tam O’Shanter,” a slightly veiled autobiographical story of a ne’er-do-well farmer, which is now considered a masterpiece of narrative poetry. In 1793 he then contributed to publisher George Thomson’s A Select Collection of Original Scottish Airs for the Voice. Burns is credited with having authored more than 550 works, including the well-known pieces “A Red, Red Rose,” “The Battle of Sherramuir,” and “Auld Lang Syne,” commonly sung in chorus at the stroke of midnight on New Year’s Eve.

Though his writing career was short lived, Burns’s legacy continued to shine after his death from rheumatic heart disease. Considered the Bard of Scotland, and a major figure of the Romantic movement, many of the early founders of socialism and liberalism found inspiration in his works. Abraham Lincoln called Burns a “transcendent genius” and was known in his days as an itinerant lawyer to carry a leather-bround book of Burns’s poetry into Illinois courtrooms where he would recite many works by heart. J.D. Salinger based the title of his 1951 novel The Catcher in the Rye on the Robert Burns poem Comin’ Thro’ the Rye. John Steinbeck’s 1937  classic Of Mice and Men took its name from a line in the Burns poem “To A Mouse”:  The best laid schemes o’ mice an men / Gang aft agley. References to Burns have appeared in hundreds of films and TV programs, including It’s a Wonderful Life (1946), When Harry Met Sally (1989), and Forrest Gump (1994).

Why is Robert Burns celebrated?

The first Burns Supper was held in July 1801 when nine of the poet’s close friends gathered to mark the fifth anniversary of his death. It took place at Burns Cottage in Alloway and included a meal of haggis and performances of Burns’s work. In the years that followed, Robert Burns Clubs began to emerge—with members known as Burnsians—and an annual Burns Supper became a highly anticipated rite for thousands worldwide who celebrate on dates that fall near the poet’s birthday. Burns Suppers can be either very formal or lighthearted affairs. The evening centers on the entrance of the haggis (a minced offal-and-suet sausage baked in a sheep’s stomach) on a large platter to the sound of bagpipes. When the haggis is on the table, the host reads the “Address to a Haggis,” an ode Burns wrote to the Scottish dish. With dramatic flair, the haggis is is sliced as the following lines are read:

An cut you up wi ready slight,

And then, O what a glorious sight,

Haggis—described by Burns as the “great chieftain o’ the pudding-race”—is a largely misunderstood concoction in the United States. A 2003 survey found that a third of American visitors to Scotland believed haggis was an animal. Nearly a quarter thought it could be hunted in the wild or fished from a stream. The savory pudding dish contains a sheep’s heart, lungs, and liver mixed with oatmeal and various spices before it’s stuffed into a casing made of sheep intestines. Reviled by many but strongly defended by devotees, it is considered the national dish of Scotland. Haggis is nearly impossible to authentically create in United States since the USDA banned the sale of livestock lungs as human food in 1971. A prohibition on British export lamb in 1997 during the mad cow disease scare complicated matters even more. American cooks often improvise by substituting tongue for the lungs. 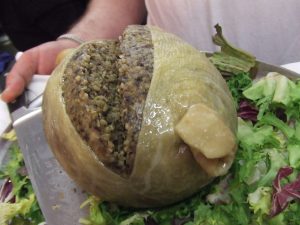 Haggis is the national dish of Scotland. Image courtesy of Wikimedia.

Join in the fun at NOMA

Friday Nights at NOMA’s tribute to Robert Burns in partnership with the NOLA Project on January 31 will feature special programs from 5  to 9 pm. Though a Burns Supper will not be served, the “Address to a Haggis” ritual will be staged and Café NOMA will serve a delectable Scottish cock-a-leekie soup along with other menu items. A bar will be set up in the Great Hall. The Art on the Spot drop-in activity table welcomes guest from 5 to 8 pm. The evening will begin at 5:30 with a reading of the “Immortal Memory,” an elegy to Robert Burns. From 6:30 to 7 dancers from the New Orleans Calendonian Society will perform and visitors are welcome to join a demonstration. The ceremonial entry of the haggis will take place in the Great Hall at 7 pm, and the evening will conclude by 9 pm with all visitors encouraged to gather for a singalong of “Auld Lang Syne.” Throughout the evening professional actors will read Burns’s poems, and visitors are encouraged to pick from a selection of works to read aloud at a microphone.

Standard admission applies—visitors age 19 and under and NOMA members are admitted free. All exhibitions and galleries, along with the Museum Shop, remain open until 9 pm.