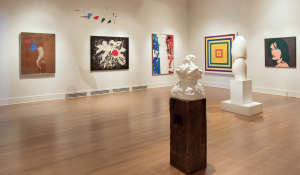 NOMA’s permanent collection galleries now tell a more robust, inclusive story about the history of twentieth-century art, thanks to a major reinstallation of the museum’s collection that has unfolded across four galleries over the course of the past year. This reconsideration of the museum’s collection looks beyond the conventional narratives of art history to significantly broaden NOMA’s chronological, geographic, and cultural reach. Prior to this reinstallation, art displayed in the permanent collection galleries ended around the year 1960, but the space now includes works by contemporary artists. These updated galleries reflect a more complex and nuanced approach to art history that better represents the diverse communities the museum serves.

The Marjorie and Walter Davis Gallery offers an expansive international perspective on the rise of abstract art, highlighting the unexpected affinities between artists working as far afield as Paris, Maine, the Middle East, and New Orleans. Bringing together works by both American and European artists, this gallery tells a global story while never losing sight of local connections, highlighting New Orleans’ influence on artists like Odilon Redon and Ralston Crawford, and showcasing the unexpected visual corollaries between works such as Wassily Kandinsky’s Sketch for “Several Circles” (1926) and former Newcomb College professor Will Henry Stephens’ Abstraction (1940).

The P. Roussel Norman and William D. Norman Gallery brings fresh perspective to iconic NOMA works such as Pablo Picasso’s Woman in an Armchair (Jacqueline Rose Picasso) (1960), by presenting them alongside little-known experimental works by self-taught artists like Federico Castellon and Manierre Dawson. Demonstrating the unexpected connections between artists coming from dramatically different contexts and backgrounds, the gallery introduces new voices into the presentation of major artistic movements like cubism and surrealism.

The Viavant Gallery injects a vibrant pop-culture sensibility into the installation with Frank Stella’s jazzinspired Scramble: Ascending Yellow Values, Descending Spectrum (1978) and Andy Warhol’s Mick Jagger (1975). The gallery also brings the voices of female artists like Joan Mitchell, Louise Bourgeois, and Alma Thomas into conversation, demonstrating a more complex and nuanced view of the field of abstraction alongside remarkable paintings by artists such as Joan Miró, Sam Francis, and Richard Diebenkorn.

Robert Rauschenberg’s monumental Melic Meeting (Spread) (1979) is the centerpiece of NOMA’s Entergy Gallery, which now extends all the way into the twentyfirst century. This gallery brings together a group of artists who all work with collage and assemblage, combining found images and objects to reflect on the complexities and contradictions of our current cultural moment. Works by Thornton Dial, Joseph Cornell, and Louise Nevelson speak directly to pressing issues in today’s culture, as well as emerging issues in contemporary art. Offering fresh perspective on art history, this reinstallation offers an opportunity for NOMA audiences to better understand their place within art history as well as the role that modern and contemporary art might play in their lives.